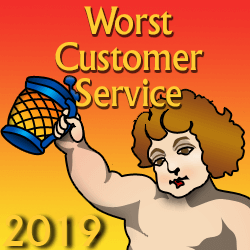 From the desk of Max Drayman, Casinomeister Complaints Manager:

This year our Worst Customer Service award goes to the numpties at CBet.gg. They confiscated a player’s balance of €24,000 claiming that he was “a fraud” and had cheated the casino by using Martingale betting. But they had no clause in the Terms prohibiting Martingale and the player had the screenshots to prove it. A few days later a clause against Martingale betting suddenly appears in the Terms.

Player continued to argue with the casino and they now said “players from your country aren’t permitted”. Back to the Terms, screenshot, again no such clause, Support denies it, and again a few days later the exclusion clause suddenly appears. Now they offer to refund his deposit. The player starts looking for arbitration on his case which included us.

Fast forward a bit: “I got a call today from the casino offering me 5000 euro if I agree to sign an agreement to have all the negative reviews removed from the net. I refused ….”

Fast forward another couple weeks and the player gets a call from “a mediator” with a new offer: €5k up front, another €5k when the social media stuff is deleted and the balance at some later date. He adds that the casino admits they were at fault. The mediator won’t identify himself, calls only from a blocked number, and claims that his email “doesn’t work”.

At this point we go to the casino and point out that this is not the way to go about things. They’re basically blackmailing the player into deleting the social media stuff in order to receive money that by their own admission is rightfully his. If they do this every player-facing site on the web, including us, will run with the story of their outrageous treatment of the player.

The casino now claims we are blackmailing them and start making veiled threats. They said “we will continue the process as it is planned with M. XYZ and we will not change a line.” As expected the player asks us to remove the forum thread discussing his case so he can get his money. We did so, temporarily, and his payments started coming through.

Our forum thread will be reinstated and a Casinomeister Warning against the casino will be posted to go along with it.