The two thousand-teen years were probably the most volatile, and spastic years in the online gaming industry. Jurisdictional regulations wrecked havoc on what was a self regulated environment, technology accelerated beyond most predictions of even the most savvy tech heads, and the demands and expectations of players rose to a level never seen before. Most online casinos either threw in the towel, merged with competitors, or rolled with the punches – the decade of the 2010s is littered with the cyber skeletons of casinos that can only now be found archived at the Way Back Machine, or mentioned in some forum thread of yore. 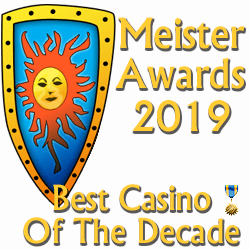 But one casino that seemed to be ahead of the game is VideoSlots. Launched in 2011 by some dudes who were online poker players, Video Slots was already boned up on what makes a successful casino. They started off with listing the RTPs of each game – a first for any casino at that time. Many casino operators were reluctant to even entertain that thought. And this was just the beginning. Each year, VideoSlots introduced new player friendly functions which their peers and competitors began to replicate – and adage goes: imitation is the sincerest form of flattery. Many of the functions that they introduced in the early part of the decade (deposit limits, loss limits, time out periods, etc.) are commonly found now, and in many cases mandated by licensing jurisdictions.

In 2014, they were awarded the coveted Casinomeister Best New Casino Award, and that was their springboard to dive into a pool of player focused awards: Best Casino four years in a row, Best Casino Manager, Best Gaming Experience for four years. And besides all of that, there are heaps of praises from countless players in our forum.

And like any casino faced with the challenge to stay viable in an era of draconian licensing regulations, Video Slots has received its share of bumps and bruises. Even so, this casino has earned the accolades: Online Casino of the Decade.