One of the worst things that can happen to an affiliate, especially one who is just getting started and has just began his or her amazing journey, is to get a blustery threatening letter promising to bring a wrath of fines and Johnny Law down upon you if you do not immediatly comply with their demands.

This happened in November 2016 when the Information Commissioner’s Office (ICO) sent a mass snail-mailing to just about every affiliate located in the UK. The preamble was this:

“It has come to the attention of the ICO that a large number of potentially unsolicited text messages (SMS) promoting online gaming sites have been sent by affiliate organisations including yours. These SMS messages were, it is believed, sent in breach of regulations 22 and 23 of the Privacy and Electronic Communications Regulations (PECR).

The ICO’s opinion is that where an affiliate sends an SMS on behalf of or promoting the website of, a gaming company, then that affiliate is the sender of that communication and must comply with regulations 22 and 23 of the Privacy and Electronic Communications (EC Directive) Regulations 2003.

Failure to comply with these regulations can lead to enforcement action being taken by the ICO which could…lead to the imposition of a civil monetary penalty, up to a maximum of £500,000 for a serious breach of any of this regulation…” 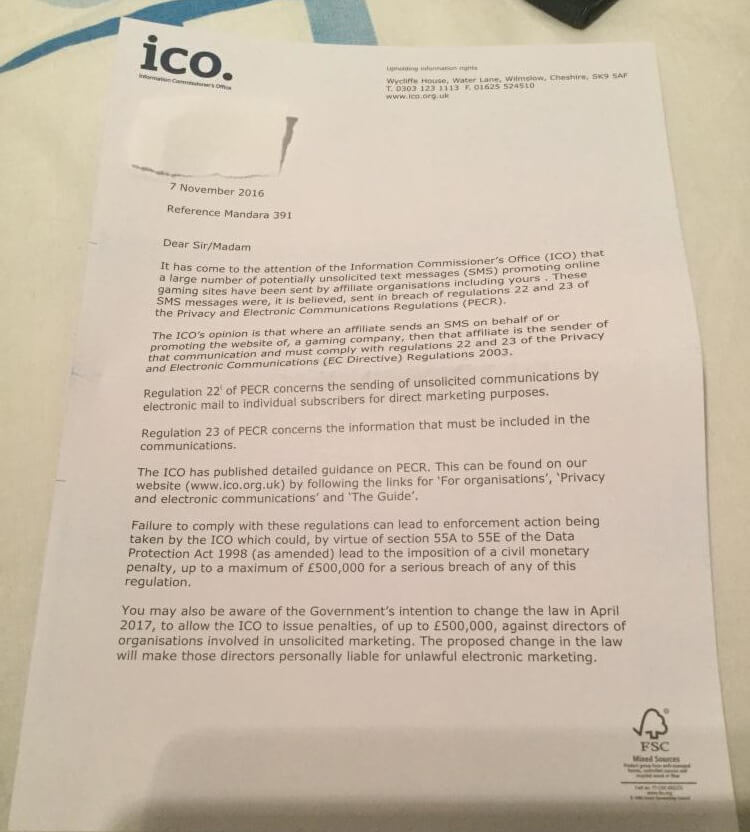 The thing is, the majority of the affiliates that received this letter had nothing to do with any wrongdoing whatsoever. The email list of affiliates had originally come from Income Access which had given the Canadian anti-spam regulator (CRTC, Canadian Radio-television and Telecommunications Commission) it’s list of UK based affiliates upon its demand.

Those affiliates that received this blow-hard email were understandably rattled – and scared. It was a mountain of unneeded stress – and it just underscored the ineptness on the ICO. Instead of following up on actual bona fide complaints, they chose to send out a accusatory and threatening letter. It didn’t matter that most of these affiliates run honest businesses that comply with the law, what mattered was that the ICO positioned itself as a defender of people’s sacred SMSs and email accounts. The irony is that many affiliates are subjected to the same sort of spam.

One of the worst affiliate experiences this year has to be attributed to BettingPartners. They made the command decision to deal only with Bitcoin, and applied this across the board – not only to their players but to their affiliates as well. For some affiliates, especially those flying under the radar, this may be ok. But for companies that are above board and that have regular audits done by the tax authorities, this did not bode well. Bitcoin has always been associated with money laundering, fraud, and dealing with the black arts. Forcing affiliates to “take it or leave it” is about as un-partnerlike as you’re going to get.

Obviously, they had their reasons, but they alienated a number of affiliates who felt that they were no longer part of the marketing equation – no longer a valued “partner”.

Quick Think Affiliates draconian terms and conditions were enforced on one of our Webmeister members which stated “…neither the Affiliate nor its employees, or their family members, friends or associates may make purchases, directly or indirectly, through the Links for its or their own personal use or to fraudulently increase the Affiliate’s Commission.” His account was shut down for referring another member of our forum.

This is not only shortsighted, but it’s not based on the reality of the web. Many affiliates run their own sites which include discussion forums like Casinomeister. People will sign up at these forums, and in time you’ll get to know some of these folks – your webmaster buddies. What this affiliate program is saying is that your account will be closed if you send someone you know to the casino. Applying this to Casinomeister would definitely suck since I know quite a few of my members personally, but to a smaller affiliate this would be disastrous – even catastrophic since they will be inviting their friends and fellow webmasters to check out their sites.

In fact, as webmaster buddies – many of us sign up at each other websites to ensure that the stats track correctly, and to try and pound our buddies’ affiliate accounts into the paleolithic period of negative revenue. Ha ha.