Lightning Box is a leading multi-channel supplier of video slots to the casino gaming industry. Lightning Box was founded in 2004 by former Aristocrat and IGT game designers Peter Causley and David Little. They are an independent studio based at the King Street Wharf in Sydney, Australia, and supply top quality gaming content to land-based, online, and social casinos around the world.

Lightning Box has a catalogue of hit games playable online through Casino Operators like Unibet, LeoVegas,  Betsson,  Bet 365 and many more.

Dolphin Gold is a 40 line 4×5 reel video slot with the unique stacked Wild and Bonus trigger, allowing up to 21 Free Games to be triggered. During Free Games, further stacks of Wild Gold Dolphins are added to the reels, with the potential to win great prizes with up to 16 reel positions being wild.  All prizes with a wild symbol are Doubled. The unique math model, along with a good number of visual and audio celebrations, ensure players are always experiencing a thoroughly engaging and thrilling game. 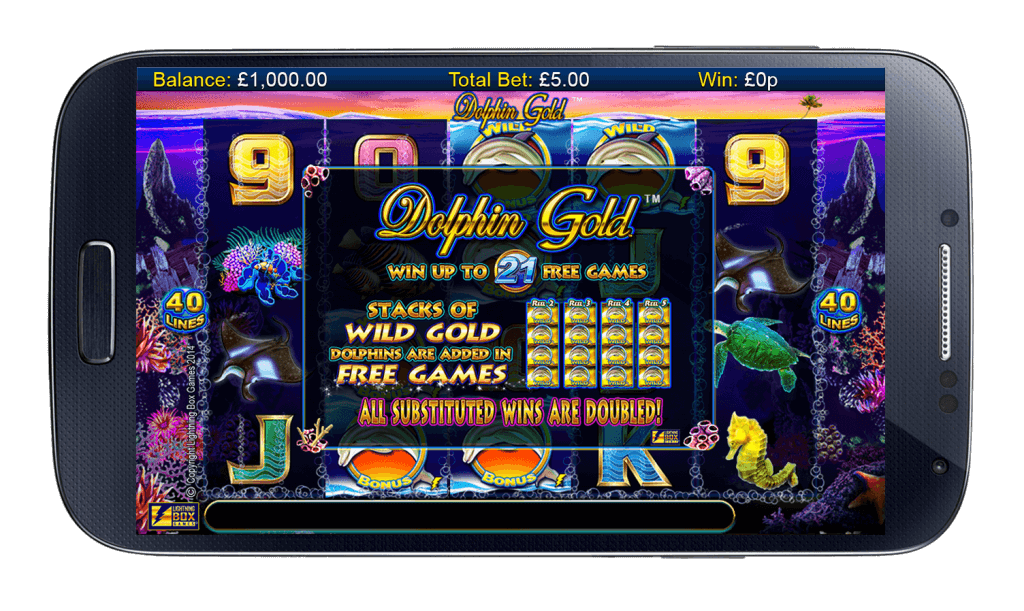 Silver Lion is a 4×5 Reel 1024 Ways game with a Free Game bonus that re-triggers often and allows for huge multipliers up to x27, along with stacked wins for even great multiplying wins. 8, 15 or 20 Free Games are initially triggered with any 3, 4 or 5 Scatter Diamonds.  During Free Games, Free Games can be retriggered from as little as 2 Scatter Diamonds, which awards 5 Extra Free Games.  Wild Trees appear on reels 2, 3 and 4, and being a Ways game, will substitute in any position on the reel.  During Free Games, each of the Wild Trees will reveal a x2 or x3 multiplier. The multipliers are multiplied together, with a x3, x3, x3 combination awarding a prize multiplier of x27.  Symbols are also stacked, which further adds to creation of huge wins. With a good hit rate in the base game, combined with Wild Multipliers in Free Games and very good chance at re-triggering extra Free Games multiple times, gives this game a Medium to High Volatility rating. 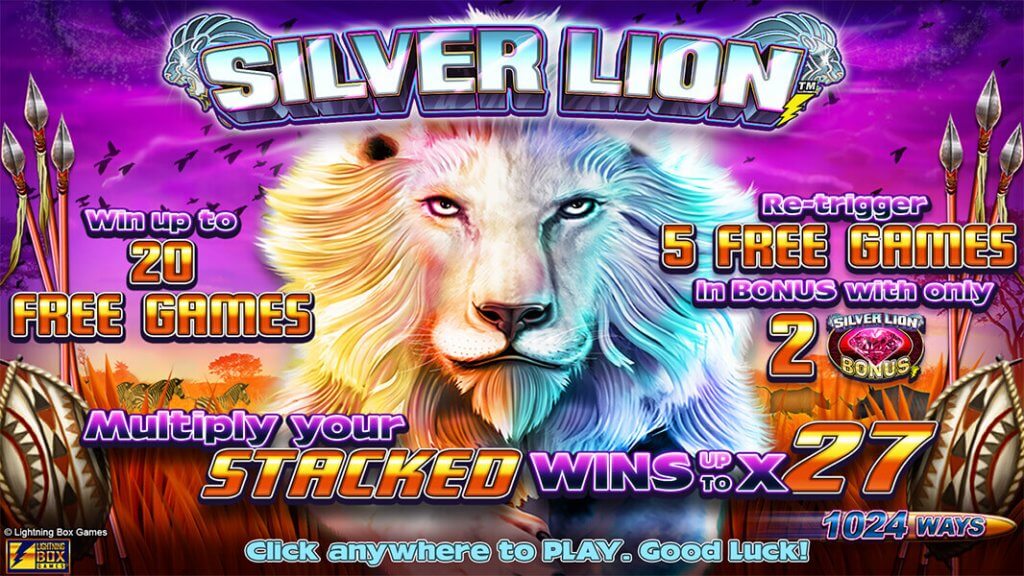 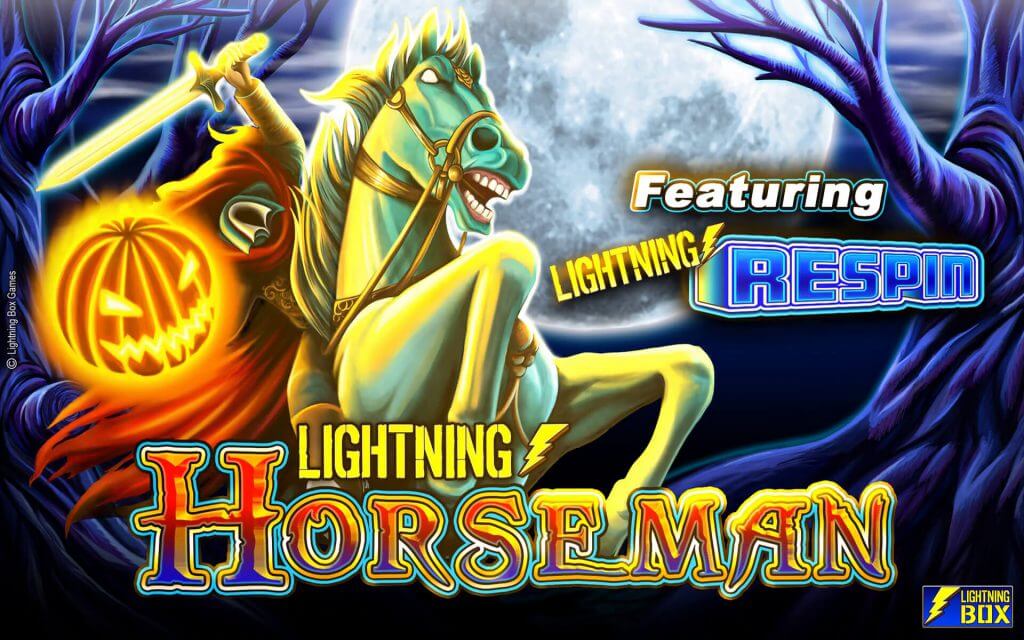 Chicken Fox is a 3×5 Reel 25 line game with a Free Game bonus that can award extra free games often and allows for huge wins with a chicken catching feature that can award up to 33x per symbol. 8, 15 or 30 Free Games are initially triggered with any 3, 4 or 5 Scatter Golden Egg.  During Free Games, further Free Games can be awarded from as little as 1 White Egg paired with 1 Fox, which awards 1-5 Extra Free Games.  During Free Games, Wild Fox appears on all reels and will substitute for any symbol except Gold Egg or White Egg for line wins. Each Fox will also catch any chickens on the screen simultaneously to give up to 33x the total bet. Multiple Foxes will multiply the chicken prizes and the awarded free games. The inclusion of a Double Fox means the wins can even further be multiplied giving the player something else to look out for.With a good hit rate in the base game, combined with a new and innovative free game feature that can award huge prizes and extra free games, gives this game a High Volatility rating. 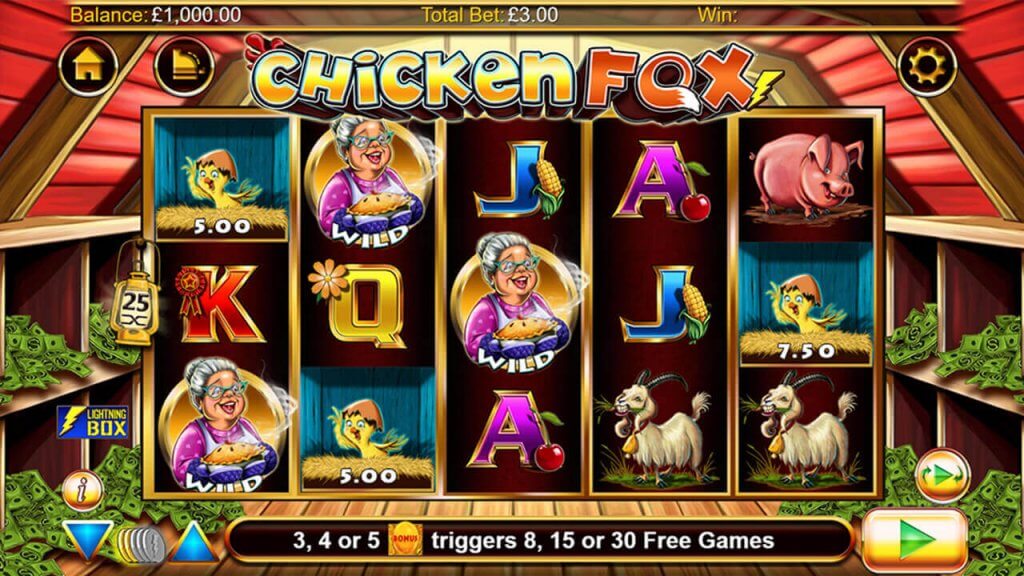 Stellar Serengeti Lions is a 4×5 Reel 40 Lines game with a Second Chance Bonus that awards Free Games with big multipliers, and a Jackpot Bonus that awards huge jackpots. Players can enter the Diamond Pick cave by getting as little as two Diamonds initially, which triggers a Hold ‘n Spin Feature.  The player starts with three Respins.  If another Diamond is hit, Respins reset to three until respins end, or until five Diamonds are locked in.  Upon locking in five Diamonds, the player is transported to the Diamond Cave where the road to riches begins.  By Selecting Diamonds, the player is awarded up to Ten Free Games with Multipliers up to x8.  If the player does not like their first choice, they are given the option to choose again.This game also includes the Stellar Jackpots bonus game.  If the player lands three Spaceships on screen, the bonus is awarded where players must choose their way through six levels. The player has three lives to start with. Upon passing the six levels the player keeps choosing spaceships till one of the three Jackpots are awarded. 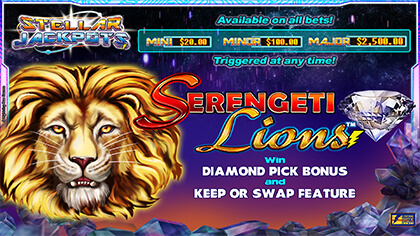