With a new change of administrative staff, BGO casino was possibly on the road to a highly recommended casino. Unfortunately the winds of change took an unexpected turn, and BGO closed its doors for good. What a shame. They could have become great.

A reliable, accredited casino with no withdrawal limits

After a number of players approached us stating how much they loved this casino, we agreed to take them on – to give them a chance on becoming an Accredited Casino at Casinomeister via the Baptism by Fire. We’re glad we did it because they blazed through their 60 day trial period without any serious problems, and the players continued to give them high praise.

Their operations were above par with no withdrawal limits, no reverse time, and they process winnings during weekends – which is great. Additionally, they have an excellent assortment of games – IGT, Bally, Playtech, NextGen, WMS, Quickspin and of course NetEnt. So far, an excellent choice for punters and affiliates alike. Newest additions include Play’n Go games!

In this BGO Casino review we’ll show you everything you need to know about the casino – and we’ll kick things off with a look at BGO Casino’s bonuses and promotions. 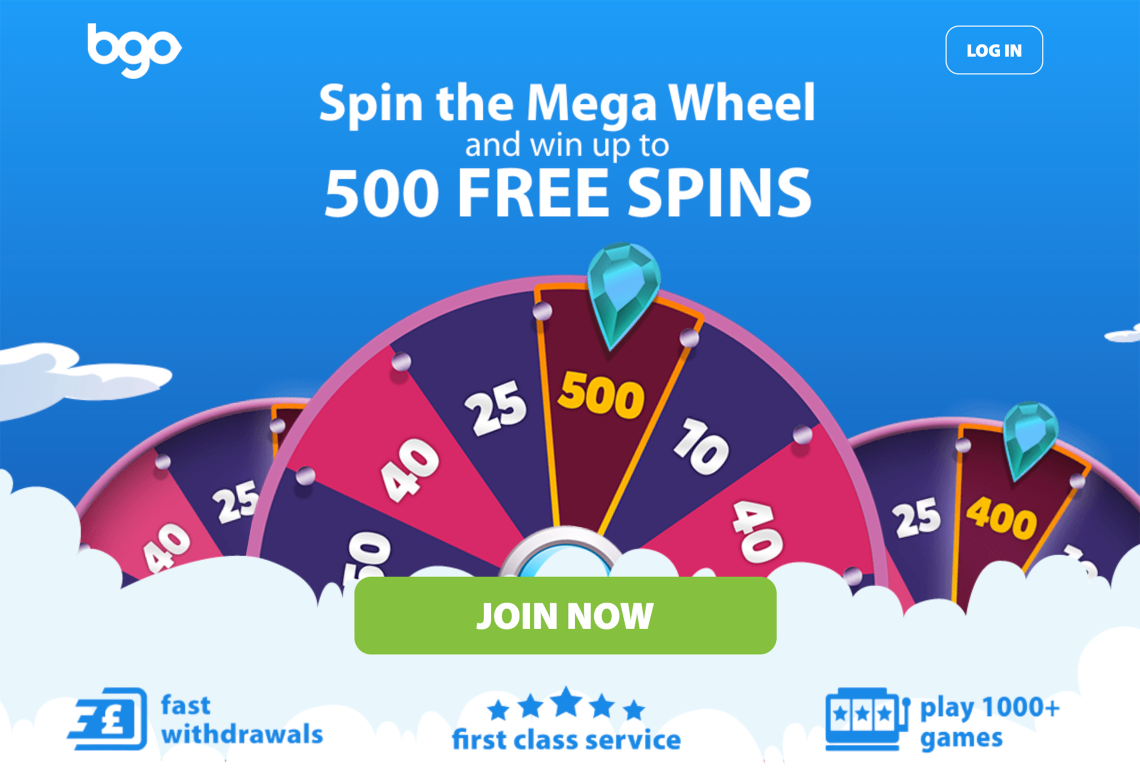 As part of writing this BGO Casino review, we wanted to look at the main welcome bonus on offer to new players. We’ll discuss it below:

BGO Casino offers a pretty standard welcome bonus, which is delivered in the format of a 100% matched deposit bonus up to $300. The bonus is easy to claim, although it does have a 7-day expiry. Max bet, $2.50, is the total you can stake while playing with bonus funds.

If you choose not to claim the welcome bonus on your first deposit, you won’t be able to claim it at a later date – it’s a first deposit bonus only.

In the past, BGO Casino used to offer a no-deposit bonus, in the form of free spins; they awarded new players with 10 free spins. Max bonus win from the free spins was capped pretty low, however, and again, there was a 7-day expiry. Max bet, $2.50 rules also applied – and winnings from the free spins could only be used on certain casino games.

Unfortunately, it looks like BGO Casino has retired their free spins no-deposit bonus, which is a shame; we’d like to see it making a comeback in the future!

Unfortunately, it looks like players no longer have the chance to win up to 500 free spins, and, along with the no-deposit bonus – 10 spin max bonus – it looks to have been retired.

Currency, BGO runs a promotion called new game tuesday, and although this isn’t much of a promotion; it’s simply a way of letting players enjoy new games. Titles like Age of the Gods were released under this promotion. 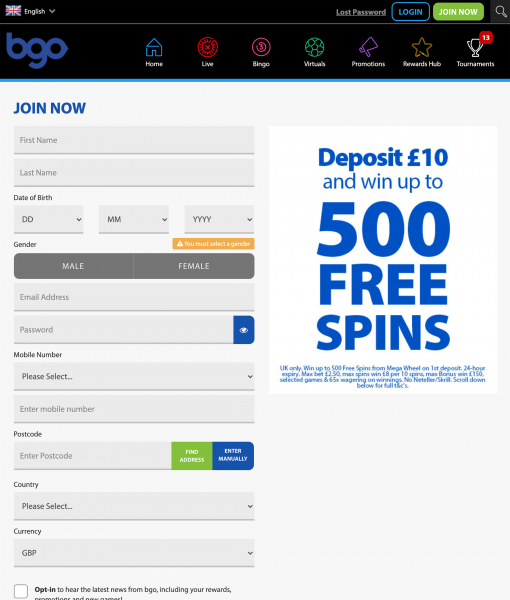 BGO Casino may not offer the most payment methods we’ve ever seen, but the vast majority of players will find themselves able to make deposits and withdrawals in a way that suits them. The online casino allows you to make payments using all major credit and debit cards – although players from the UK are no longer able to use credit cards due to regulations from the UKGC.

They also offer a number of e-wallet payment methods including PayPal, Skrill, and Neteller. The minimum deposit for the majority of payment methods is just $10, and they allow you to make deposits in CAD, EUR, GBP, NOK, and SEK.

Average Based on 10 real users

Today, more than ever, responsible gaming is critical, and all reputable online casinos have a responsibility to do everything possible to protect their players from problem gambling.

You’ll find a lot of responsible gambling options at BGO Casino to help you handle your gambling and keep it under control, including the option to set deposit limits, wager limits, time limits, and, if applicable, a cool-off period of up to 30 days.

If you feel your gaming has gotten out of hand, you will also be able to self-exclude from BGO Casino for a period of 6 months to 5 years. If you want to self-exclude, keep in mind that this exclusion will extend to all online casinos operating under the site’s online gambling license, so any accounts you hold at sister casinos will also be closed.

Whilst we love pretty much everything BGO Casino has to offer, we do feel that the casino lets themselves down slightly when it comes to customer support. The reason behind this is that their customer support team does not work 24 hours a day, 7 days a week, so if you’re playing outside of the team’s working hours you have to wait until the next working day to receive a response. At the time of writing, BGO Casino’s customer support team work between the hours of 12 PM and 7 PM GMT.

The best way of contacting BGO Casino is through live chat, as live chat allows you to speak with a member of the customer support team in real time ensuring your problem or query is answered right away. If for any reason you prefer not to use the live chat facility, you can also send the support team in email, although the site does point out that you may find yourself waiting up to 24 hours to receive a response.

There is also a very limited FAQ section which answers a few of the most basic questions players have, so it’s worth checking this out if you have any issues whilst playing at the site.

BGO Casino is licensed by the UK Gambling Commission and the Alderney Gambling Control Commission, and this means they are held to incredibly high standards when it comes to regulations. A very important part of these regulations is verifying the identity of their users, and this is achieved through what’s known as a KYC check.

KYC – otherwise known as Know Your Customer – is a process in which an online casino verifies its player, and if you choose the plate BGO Casino, you should expect to be asked to complete one of these checks at some point. If requested to do so, you will need to provide BGO Casino with a copy of your driving licence or passport, and utility bill, bank statement, or official government letter dated within the last three months showing your full name and address.

If you make a deposit with a debit or credit card you may also be asked to prove ownership of the card. This usually requires you to take a photograph of the card blanking out everything apart from the last four digits of the long card number.

One of the key things we look for when writing an online casino review is the overall functionality of the website – and when putting this review together, we were pretty impressed to see the online gambling operator has worked hard to make their site as user-friendly and easy-to-use as possible.

Navigating around the website is easy, hassle-free and straightforward, and we didn’t run into any speed issues while playing there. What’s more, all of the games on offer are developed using HTML5 technology, and this allows you to enjoy the action without needing to download or install any additional apps or software.

Unfortunately, the site doesn’t offer a dedicated mobile casino app yet, but it may well come in the near future – so stay tuned for any updates. Thankfully, they do offer a fully-functional mobile-optimized casino, and this can be accessed easily and quickly through your mobile device’s internet browser.

Slot games are the bread and butter of BGO, and you’ll find hundreds of exciting slot games to enjoy – with BGO Entertainment even developing some of their own games! Below, we’ll look at some of the top games you’ll find at the casino.

Jack and the Beanstalk is one of the top slots ever made, and it’s from a Swedish game developer called NetEnt. NetEnt’s Jack and the Beanstalk is based, of course, around the fairy tale of the same name, and it offers a unique mechanic called walking wilds which sees wild re-spins awarded. There’s also a Free Spins bonus round where you can win over 3,000 times your stake thanks to expanding wilds!

BGO boasts a fully-functioning live dealer casino and this live casino is powered by Evolution Gaming – the industry leader and a company who have invested tens of millions of dollars into refining their state-of-the-art gaming technology.

In fact, just a few weeks ago they announced they had acquired video slot giant Big Time Gaming – and this should give you some kind of idea as to the amount of leverage and respect Evolution Gaming has within the online gambling industry.

To get into the BGO live casino, you simply need to hit the ‘live casino’ button at the top of the screen. There are tons of live games for you to enjoy, from classic live games like Roulette and Blackjack, to more unusual titles like Crazy Time, Monopoly Live, Football Live and Deal or No Deal Live.

The online casino has also made it super simple to sort through all of the various games on offer, ensuring that you’re able to find the games you actually want to play, rather than ending up settling for something you really have little interest in.

Unfortunately, BGO Casino doesn’t offer a massive selection of Video Poker games; you will find yourself able to play the basics, including the likes of Jacks or Better, Deuces Wild, and Joker Poker.

There are also rather slim pickings available when it comes to other casino table games, but you will find a few of the classics like Casino Hold’em, Caribbean Stud Poker, and pontoon.

BGO offers a wide variety of progressive jackpot games, from game developers like NetEnt and Playtech. You’ll find everything from Age of the Gods, Divine Fortune and Mega Moolah all on offer – allowing you the chance to win life-changing amounts of money!

By offering a solid selection of casino games, live casino games and slots, BGO quickly became a leading online casino for players around the world. The site is powered by Playtech, and has been around since 2012.

They’re licensed in the UK and Alderney, and they’re an accredited casino here due to their clear commitment to treating players fairly and running an above-board and fair online gambling operation.

In mid 2015, they had some change of management, and they stopped monitoring the forum. This became pear-shaped, and they were subsequently removed from the site, but in June 2016 things seemed to have turned around – new management – and they came back on board.

Since June, we can say that they are on the right track. They have been doing a bang up job in the forum – being very proactive and assisting players when needed. Great going BGO!

BGO, MrGreen, any reason why I'm getting 100's of spam emails from your affiliate?

Great casino and nice with at BGO Casino