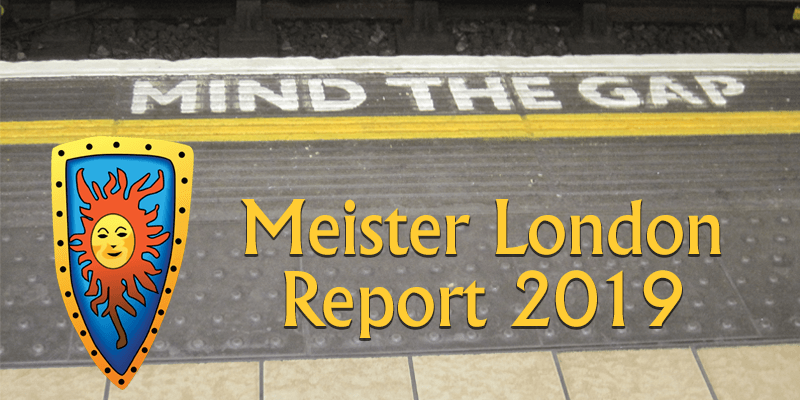 London Meister Report 2019: Plans for Casinomeister and Some Sad News

Wednesday morning came at around 10:30 am where Max, the Casinomeister tech crew and I met for breakfast and made plans for the next couple of months.

One thing is to get the PABs listed on the site so that users can follow their status like a hockey score sheet. Our visitors will be able to take note on which casinos are having complaints submitted, why they are submitted, and the status and outcome. We have done this in the past, but it was too laborious doing it by hand and it got buried into the archives. This one will be connected to our ticketing system.

Also, plans to put the Meister Minions to work so that they can rank the casinos on their review pages and make comments as well. This, like the PAB status board, is a work in progress.

It was then off to our annual liquid lunch with the iNetBet guys. What an awesome lunch at the Chotto Matte – the conversation went from The Specials to The Long Good Friday and also how Gary Oldman has never played a bad role – and then further about how this industry has changed over the years – and how some of it has remained the same.

P.C. gone mad was also brought up again. Everyone is afraid of offending someone. And you never see police on the streets of London anymore. Maybe one or two, here or there. But now if you are victim of a crime, you are supposed to text a message to the Metropolitan Police (WTF?). If it is a serious crime like assault rape or murder, they ask you to phone. But if it’s larceny or stolen property, you will get a ticket number for reference, and that is about it.

The UK has laid off about 14,000 police officers in the past year or so. I know first hand how frustrating this is. I have been a victim of theft, and at the moment I only have a docket number. For a foreigner, that is pretty disturbing. It is a sign of a failing system – the lack of police on the beat when the crime rate is high. And with the upcoming Brexit faceplant – well, good luck with that.

After a fond fare thee well, Max and I went off with the Video Slots guys to the Boisdale of Belgravia for dinner, whiskey, and cigars – well no cigars, but whisky and dinner. And as the night wore on, so did we.

Thursday morning it was the ICE once more for a meeting with the Kahnawake Gaming Commission. And this is where we received some sad and tragic news: Brian Cullingworth (aka Jetset in the forums) had passed away.

I am still a bit speechless. Brian was a close friend and a big part of Casinomeister going back to 2000. His news reports, Infopowa, were a main staple of our Casinomeister News going back to July 2001. He was a legend of the old school online casino industry making every conference, interviewing upstanding operators and rogue ones alike with a paper notepad and pen. He was critical of the hypocrisy that runs rampant in the industry – he was a player’s advocate and assisted fervently in the early days. Before there was a PAB section, before there were licensing jurisdictions that gave a hoot, before there were any player organizations to assist aggrieved players, Brian was there helping folks out in the forum.

Each week in the early days, Brian published “Casino Cautions” and had his own podcast at the now defunct Casino Gazette (may have copies of some old ones – I must dig through some old hard drives).

Brian was simply a true gentleman. Someone a person could easily look up to and admire and respect. I know I did. He was always on the right side of an argument – and stood firm with his upstanding venerable character. He will be sorely missed. We have lost a hero and a friend.

That said, we talked about Brian at length at the KGC meeting, who each year had joined us there, and continued our mission as player advocates and being as informative as possible.

As for the Kahnawake Gaming Commission – we discussed Responsible Gaming/Self-Exclusion a bit. All KGC licensees must have Responsible Gaming pages, and if any player self limits him or herself, the casino is required to CC the gaming commission concerning this request.

We also discussed the “Source of Wealth” requirements that the UK and European casinos are implementing. This will be an industry killer in my opinion, and it will only strengthen the black market casinos. I don’t blame players at all for playing at non-licensed casinos. SOW is far – far too intrusive. And the Einsteins who came up with the idea to require casinos to ask for SOW documents are either clueless on gambling activity, or that they have black market casinos of their own.

The KGC has no SOW requirements nor do they plan to implement this at all.

I still adamantly feel that the KGC has the best thing going when it comes to being a player supportive licensing jurisdiction. Both the UKGC and MGA should take a look at how they deal with their clients.

Voice from the Past – ICE London report 2008: French cuisine was the next rendezvous: Jetset, Andrew Beveridge, and Tex Rees were waiting for me at Le Boudin Blanc, situated in an old rustic building – it was some of the best French food I’ve had outside of France (refer to my EIG trip in Nice for more on French food).

The conversation revolved around mostly industry stuff, and of course Tex and I spoke about player issues since this is one focal point of both Casinomeister and eCOGRA. And there is a fine equilibrium at work with both entities. Tex can pursue with ease (in most cases) player issues with eCOGRA member casinos, and Casinomeister can pick up the slack with issues on non-eCOGRA members. Unfortunately, there is still a large void where many gamblers are still loitering – no thanks to the UIGEA which is clearly having the opposite effect that the political moralist were attempting to achieve. What a shame.

From here, max and I meandered to the London Affiliate conference next door.

Onward to the LAC…