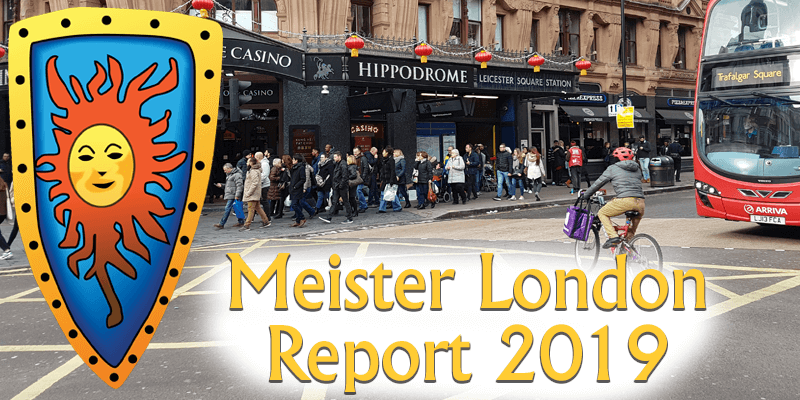 And man, what a trip it was this year. A full week in London – one of my top destinations in the world – the pubs, the history, the web-like mesh of cultures – throngs of tourists and locals alike, and did I mention the pubs?

Yes, I have to admit it – the pubs are what seem to capture my attention the most – not for the various beers on tap, but for the sublime atmosphere and how they bring folks together young and old. But first – the amazing world of online gaming.

It started with Monday’s pre-conference warm-up at the Sherlock Holmes Pub near Trafalgar Square where Max Drayman and I sat down, chatted about the forum, PABs, and about the new Star Trek “Discovery” – it was a great way to get ready for the one of the biggest iGaming events of the year – the International Casino Exhibition and the London Affiliate Conference. Besides, the Fish n’ Chips are pretty good here.


We moved on to the Anchor Tap near the Tower Bridge and enjoyed a nice pint of Sam Smiths Double Stout and spoke with the operator of Karlaja Casino which is about finished with its Baptism by Fire. We are looking forward to be bringing them on as an Accredited Casino – good news there.

From there we mosied on over to Le Pont de la Tour an amazing French restaurant which we were at last year with the folks from Kahnawake and SportsInteraction (they only take Canadians). Really a very nice meal with a great crowd.

The following day was the highly anticipated Meister Meeting that was to be held, like every year, at Waxy O’Conners in Leicester Square. But first, the ICE and the gathering of the Casinomeister crew.

Yep, for the first time ever, it was more than just me, Max, and Jelena. Pere, the Casinomeister project manager, Nico and Rob – the tech team made it out to London ready to check out the ICE and eventually the Meister Meeting. We gathered at the Grand Hotel in Trafalgar Square and made the 35 minute trek to the Excel via the magnificent London Underground and Docklands Light Railway service. It was the first day, and the DLR was packed with suits, a polar opposite of days of yore.

Blast from the past: ICE London Report 2003 – The ICE began the next day, and it was to last until Thursday. ICE stands for International Casino Exhibition and this is the place you need to be in order to meet the most influential people in this industry. I’m not going to go name dropping, but most of the major software providers have their people here, either in booths or wandering around, and many of the main casino operators are here as well. This is the reason I go. I need to have a face to face contact with most anyone I deal with plain and simple. And I’m sure they want a face to face meeting with me.

This was my 19th annual ICE – my first in January 2001 – feeling old, me? Nope, but man have things changed since then. One thing I’ve noticed – and which was mentioned by a few others – the essence of the UK is political correctness gone mad. Last year, the UKGC’s gambling director Sarah Harrison mentioned that women attending the ICE are “expected to wear nothing more than swimsuits”, which was not only 100% inaccurate but extremely hypocritical. This is the gambling industry – these folks are not selling shoes – they are selling games which are hosted in establishments that are traditionally adults only venues. No one is being exploited – and the connection with gambling and sex is the nature of the beast. And for her to complain about “scantly clad women” last year just underscored the fact that the UKGC turns a blind eye towards their land based casinos. I get it, online casinos are the red-headed step-children of the gambling world. They are easy to pick on and sometimes get slapped upside the head, but if you are going to be critical about the adult nature of gaming, then clean up your own back yard so to speak.

Go to any land based casinos in the UK like the Hippodrome or the Empire and you will see a load of casino games that include scantily clad folks – clean that up first and then complain about the exhibits. Additionally, the Guardian jumped on the casino hate-train last year reporting about pole dancers putting on a show at the 2018 ICE. They weren’t pole dancers per se but Circus Soleil acrobats using a pole to do their thing instead of hanging from the ceiling. No one was stripping. Nobody was getting off from this. It was visual art and it was impressive. But yeah I get it – it’s offensive to the PC mob.

So this year we were greeted by loads of models wearing the best styles inspired by Islamic republic cat-walks – no skin showing but their hands and faces. Everyone seemed to be afraid of offending those who are easily offended. I say if you are offended by anything that can be misconstrued as “sexy”, then go work for an industry that sells house plants. Stay at home and get out of the casino business – it is not for you.

We walked the floor, and there was not much new except the lack of sexiness that the industry has been based on for about 80 years.

After some more fish n’ chips at the conference pub – The Fox, we headed back and readied ourselves for the Meister Meeting. What an awesome event.

To the Meister Meeting…