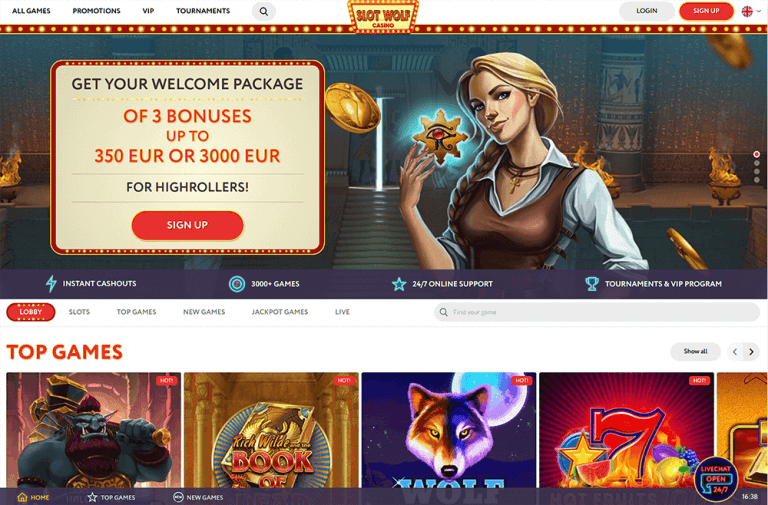 Seems like a great place, with just a little flaw which is withdrawal limits, but since there’s a good VIP program, you can progress and be excepted from those limits, being the higher VIP leveled player.

Slotwolf became eligible for the Baptism by Fire testing phase which went pretty well. Since they are a sister site to N1 Casino it was pretty easy for them. They became Accredited on 30 July 2020.

They claim no reverse time with payouts in 5 hours. This is typically for webwallets – bank wires may take a few days. Withdrawal limits are up to Euro 15,000 per month not including progressive jackpots. They do no process payouts on weekends.

We are awaiting comments from our Meister Minion members whose comments will populate this section. Stay tuned for that.

SlotWolf Casino is a well managed casino that is directly connected to N1 Casino – an Accredited Casino at Casinomeister. They seem to be alright – they passed their BBF period without too much of an issue. Members are encouraged to post in our forum their experiences – Meister Minions are encouraged to post their information and data as well.

Slotwolf is now Accredited!
Started by Casinomeister, 2 weeks ago
1
181
Last post by alcatraz
2 weeks ago

CM's charity drive for Kenyan Single Moms
Started by Casinomeister, 3 months ago
21
2688
Last post by Bitcasino.io_Karl
2 months ago
Do NOT follow this link or you will be banned from the site!
This website or its third-party tools use cookies, which are necessary to its functioning and required to achieve the purposes illustrated in the cookie policy. Find out more.