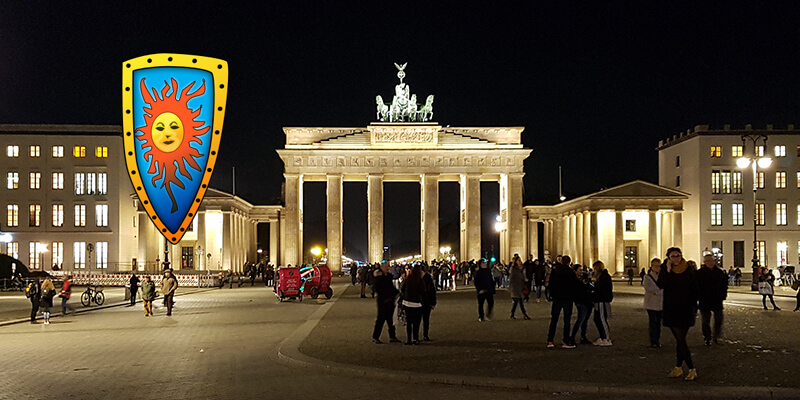 Finally, it’s over – the Berlin Affiliate Conference which is held each year in – you guessed it – Berlin. This is a conference that pertains to the marketing side of online casinos – which is just about everything a casino is all about: its marketing. One of the nicest things about this conference is that it’s just a five hour train ride for me – traveling from northern Bavaria – the land of beer, milk and honey.

And this is one thing I try to explain to folks visiting Berlin especially for the very first time; Berlin is way different than most of Germany. It’s a massive city – and all the baggage that comes with a big city is there: dusk till dawn night life, homeless folks, shanty towns, awesome art, politics, and a deep rich history – and this history is one of nationalists, communists, populists, and capitalists. It’s a pretty amazing place.

And here we have the BAC, one of the largest gathering of affiliates, affiliate managers, and casino operators. It’s an event that happens every year. And this year, it was a good one.

I came a day late because of my son’s birthday. Family first – besides, we binge watched the second season of “Stranger Things”. So that was good. And amazingly so, a number of conference goers admitted to doing the same thing. “Stranger Things” on Netflix is bingeworthy. But no worries – no spoilers here.

After about a five hour train ride, I arrived at the conference about two hours after it had started, and it was pretty full – it seemed to be a rather good turnout. I was missing my wingman, Max, who over the past few months was so focused on healing his busted wrist that he forgot to renew his passport. He was missed.

I first met with LadyJelana, our new accounts manger, who had been quite busy meeting with a number of accredited casino representatives in order to organize exclusive promos for our accredited casinos. Over the course of a few days, she was very successful.

She had collected my badge for me, handed it to me, and we were on our way and chatted a bit about the industry. What is new? Well the prevailing topic was…compliance. Affiliate advertisers of online casinos are being held to a higher standard since the UKGC cracked down on spammy, deceptive, and false advertising done by the spam-meisters. And it’s about damn time I say.

This is something I’ve been hammering on for years. In fact, accredited casinos are obligated to abide by our standards of no spam, and to take swift action against spammers or else they lose their Casinomeister accreditation. This is what happened to Casumo last summer.

There are quite a few affiliates who lack proper ethical guidance, and have been the focus of a number of threads in our forum – one had to do with the crap that was coming from Casumo Casino’s affiliates – and which caused them to lose their Casinomeister accreditation for several months. This can be found here: Casumo Spam Problem – and I’m not going to bang on about this issue too much – how our Accredited Casino standards have always prohibited unethical marketing practices, but we have had these certain standards for nearly two decades, and it is only now that a licensing jurisdiction is cracking down. And it is now that I am receiving emails from affiliate programs warning me against spamming people. Really? Yep, really.

The UKGC had taken note of this episode and began fining casinos that did not prevent this form of rogue advertising to stop. Now, it’s gone even further with actions against casinos that have imagery that can be attractive to under 18s. Which by the way, is one of the stupidest terms I have heard lately – how about using “minors” instead.

Anyway, a number of casinos are having to look at a possible rebranding. Look at the Casumo character for instance – affiliates are no longer allowed to display the Casumo character – which I admit does look a little childish. You can still see their advert on their Youtube channel – none of which are in English which I guess keeps the UKGC off of their backs: CasumoTV .

So we have casino characters that may or may not appeal to kids. This could be why the Royal Panda Panda now bares its teeth:

Which incidentally has been sold to LeoVegas.

And then there are the characters of Casino Heroes, or Cashmio, or even the characters that appear in the games like Jack and the Beanstalk, or Emoji Planet™ Slot. C’mon – what are you thinking NetEnt?

It’s going to be interesting to see what changes these brands will make to ensure that they are not attractive to minors.

LadyJelena went on her way to meet up with some more casino reps – and I began to peruse the gaming conference floor. I was trying to be incognito with my badge: crapbonuses.com, but even with this clever disguise, people still recognized me.

I met up with Rich who represents Diamond Reels casinos. We talked a bit about the casino properties, what they would have to do to be considered for accreditation, and more about non-casino stuff. We reminisced a bit about the old days (he was the first person to purchase banner ad space from Casinomeister in 1998 for a Microgaming brand), and about some recent personal experiences I have had with discovering a load of color slides that were found among items left by my late father. For one, these were taken by my grandfather in Peru during the 1930s. He had done some articles for National Geographic back then – and these are National Geographic worthy. Amazing stuff, but that is another story.

As the day rolled along, the conference seemed well attended. There were some SEO presentations going on, but one I was looking forward to was a presentation on the launching of the International Gaming Affiliate Association (iGAA). The iGAA hopes to do two things – protect the casino affiliate or webmaster from unscrupulous and unethical casino practices, and to protect casinos from unethical affiliates.

There has been a load of lack of ethics in the online casino marketing realm, that has until recently been ignored by the press. It was just last September that the main stream press in the UK (The Guardian, The Independent.co.uk) published a few articles that weren’t the best researched – and a bit biased towards sensationalism and anti-gambling, and it caused a relative furor with non-players – or people who do not understand online gambling, nor want to: A whole series of articles in The Guardian on gambling.

One headline: “Problem gamblers place up to 90 bets a day and bet in middle of night”. Really? A lot of people enjoy playing video poker late at night to wind-down, and playing more than 90 hands within a few minutes is the norm. But honestly, like Simmo! mentioned in that thread: “Can’t honestly remember ever reading a balanced article about gambling in any mainstream media. No-one’s interested in that.” And that’s pretty much true.

But back to the iGAA – I really hope this becomes a successful endeavor. Watch this space for further developments.

Lunch: I couldn’t be bothered to wait in line with the few hundred of peeps who were as hungry as I. So I resorted to free pop corn and other delicious snacks I found at many booths. Merkur Partners even had some savory buttered pretzels which were much appreciated. And yep, there was beer.

Day two was a repeat of day one – more casino reps to meet – and there are a handful of new casinos that will be placed into the Baptism by Fire section. Again, watch this spot for details (or at least the newsletter), we will be bringing them on soon.

That evening, I had a wonderful evening with my friends from Legend Affiliates – they have the recently accredited casino CasinoMax and BBF casino – Cherry Jackpot. It was Italian – which is an excellent choice in Germany. The Italian food here is almost better than in Italy. It was a splendid evening that left most everyone quite satisfied.

So all ‘n all, it was a pretty good conference. I got a pretty good vibe from most people – the vast majority of individuals who care for what I do, and who can tolerate listening to my stories told not only once, but twice, sometimes even three times – your good thoughts and wishes are most appreciated and valued.

Thanks for giving an old man something to do.