243-Ways-To-Win Slot: What Are They And How Do They Work? 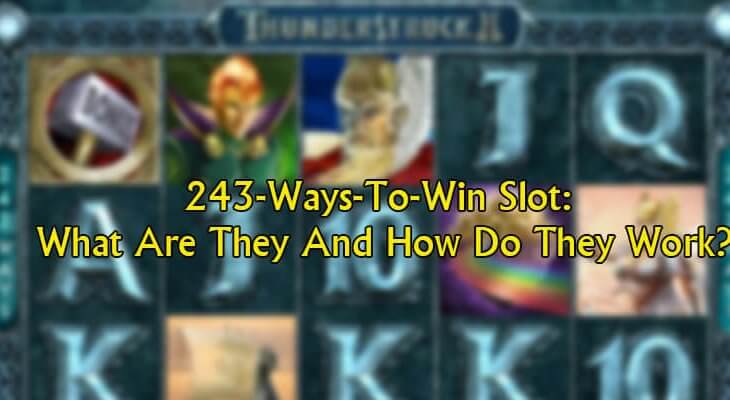 Let’s start at the beginning. Think about classic Vegas-inspired slots – you know, the classic one-armed bandits. These types of games typically had just one payline – meaning you needed to match three (or sometimes five) symbols on the centre reel. Doing so secured a win, and this is where the modern slot machine was born.
Over time, developers realized that players wanted a more vibrant playing experience, and they gradually incorporated more paylines into their games. For example, 3-payline slots soon became prevalent, and it wasn’t long before we saw 5, 10, 20, 50, and even 100 payline games on the market.
However, the thing with paylines is that you need to match symbols on specific win-lines. That’s where 243-ways-to-win are different. 243-ways-to-win slots have a total possible win-ways of 243. Say, for example, you’re playing a slot that pays $1 for a 5-of-a-kind combination of the top symbol. If you landed a full screen of this top-paying symbol, you would be paid 243 X $1 – for a total of $243.
On a 243-ways-to-win slot it doesn’t matter where the symbols are – as long as you form a 3-of-a-kind (or sometimes a 2-of-a-kind) combo, you’ll be paid out regardless of where the symbols are positioned.
So, now that we know what 243-ways-to-win slots are, let’s take a look at some of the major ones available to play online today.

Today, there are well over 100 243-ways-to-win slots for players to enjoy – and below, we’re going to look at some of the most popular.

Thunderstruck II – Microgaming: Thunderstruck II is one of the first super-popular 243-ways-to-win games and it’s based around Norse mythology – based in the ancient city of Asgard. The game is famed for its volatility, and 5 superb bonuses await players. With a total win of a whopping 2,400,000-coins it’s not hard to see why Thunderstruck II has become such a hit with players, and while old, it remains one of Microgaming’s best releases to date.

Game of Thrones – Microgaming: Microgaming have 2 Game of Thrones slots – and by far, the most popular one, is the 243-ways-to-win variant. Based on the hugely-popular TV series of the same name, Game of Thrones – the video slot – is also famed for its volatility. Players can choose one of four free-spins bonuses, where all wins can be multiplied by up to 5X!

Twin Spin – NetEnt: Twin Spin is one of NetEnt’s most successful releases in history, and, as you can probably tell, it’s based around a 243-ways-to-win format. What makes Twin Spin unique, is that it contains a ‘linked reels’ feature. On every spin, anywhere between two and all five of the reels will ‘link together’, displaying identical symbols upon landing. Of course, if you’re lucky enough to get all five reels linked – and they land a premium symbol – it’s possible to get a full screen of just one symbol, making for some huge win-potential!

Sam On The Beach – Elk Studios: Sam on the Beach is one of Elk Studios’ most successful releases so far and it follows the adventures of a quirky beach-lover called… Sam! The game is bright, vibrant, fun – and also utilizes the 243-ways-to-win mechanism we’ve been looking at. Landing 3, 4, or 5 of the scatter symbols anywhere in view will trigger the free-spins bonus, during which all of the premium characters give ‘boosters’ when they form part of a win.

Fortune Charm – Red Tiger Gaming: Red Tiger are known for their great-looking slots, and Fortune Charm is no exception. What makes it special is that it was one of the developer’s first slots to utilize the 243-ways-to-win mechanism. Based heavily on an Asian theme, Fortune Charm features pictures and imagery from Ancient China, and a soothing, relaxed soundtrack accompanies each and every spin.

Phoenix Sun – Quickspin: The first Quickspin slot to make this list is Phoenix Sun. Based on an Ancient Egyptian theme, the slot offers players fantastic, high-quality graphics, great gameplay and an exciting feature. Each time, during the base-game, that a win is formed using one of the premium red wilds, three additional positions will open up. If you manage to unlock all 9 of the additional symbols you’ll trigger the free-spins round – and this plays out with the reels fully unlocked at 7,777-ways-to-win!

7 Sins – Play’n Go: Play’n Go are known for creativity, and many of their games – Reactoonz, Book of Dead and Moon Princess – have become go-to games for many players. 7 Sins, however, is one of their less-often played games – but it’s capable of producing some mega wins. Of course, using the 243-ways-to-win format wins can be formed anywhere on the screen, and what makes this game really special is the double wilds; this makes it possible to actually hit 10-of-a-kind combinations, despite there being just five reels – and it’s a game that has some monstrous win-potential, too.

Flame Busters – Thunderkick: Thunderkick are also known for their creativity levels, and Flame Busters was a slot that really put them into the spotlight. This fast-paced, action-packed game follows the life of a fireman – and an exciting bonus round can see up to all five of the low-value symbols transformed into mystery symbols. All mystery symbols on screen then reveal themselves into an identical symbol – and naturally, it’s possible to hit a full screen of one symbol here, leading to mega wins!