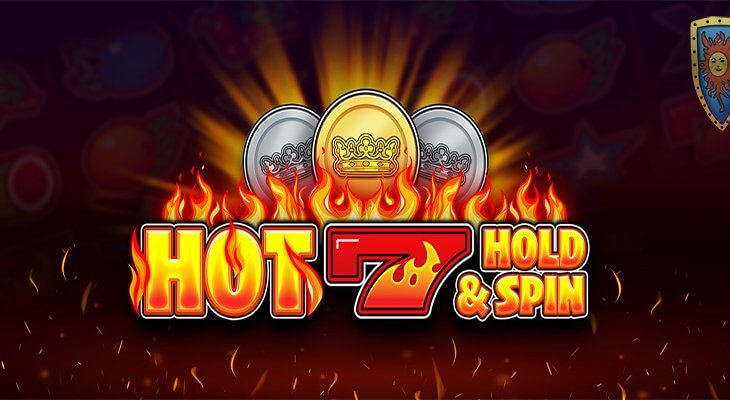 The latest online slot game offering from Stakelogic is the titled Hot 7 Hold and Spin, a fruit machine inspired video slot game playing over 3 rows and 3 reels with a total of 5 paylines in play.

With a reported RTP of 95.30% and a maximum payout of 50 times your bet stake, Hot 7 Hold and Spin might not appeal to everyone, but those of you that like ‘fruitys’ it may well be of interest and worth giving a spin.

One casino that is accredited and recommended here on Casinomeister that will be featuring Hot 7 Hold and Spin among their game portfolio is 21Casino of which you can read our review here.

The game has been designed to appeal to players that love the anticipation that builds when they hold the reels and wait for the top paying symbols to land and deliver those mega wins.

The slot also has three features  hit and these are: Hold and Spin, Expanding Wilds and Gamble

Hold and Spin is triggered when three silver or gold coin symbols land on the middle reel. The middle reel is then locked and the symbols on reels one and three are replaced by feature symbols. The feature starts with four spins and the value of the coin symbols that land anywhere on reels one and three during the feature are then added to the win total.

Players want to keep an eye out for the diamond symbol as this is the highest paying symbols and can turn a big win into a truly epic win. The three middle symbols also feature a coin with different values; the values are added to the total win once the feature ends.

Wild symbols can appear during the base game. When they do, they expand to cover all symbols on that reel and will replace all symbols except coin symbols. Players can also gamble their winnings. They can bet on the card colour or card suit – the former potentially multiplying their win x2 and the latter x4.

Speaking about the release of Hot 7 Hold and Spin, Stakelogic’s Stephan van den Oetelaar said: “We have built a reputation for designing and developing the best classic slot games in the market and in Hot 7 Hold and Spin we have yet another excellent slot that will appeal to the purist.”

“While the game may look like a standard classic slot, we have taken the gameplay to the next level with not one but three features. In particular, Hold and Spin lets that anticipation build with the middle reel locked and the top paying symbols dropping either side.”

“This really is a great game and makes for a fantastic addition to our suite of classic slot games.”