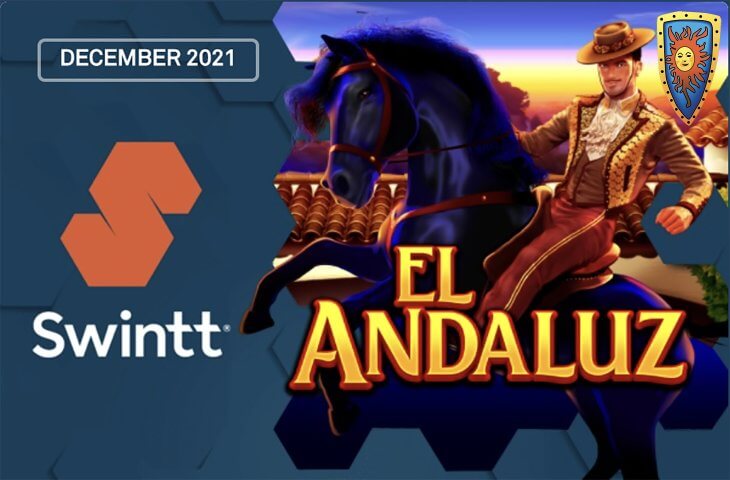 Casino game studio Swintt are not finished with 2021 just yet and have announced the release of their latest online slot game, a Spanish themed adventure called El Andaluz.

El Andaluz is a five-reel, 10-payline game with a cowboy theme. Right from the off, players will be immersed in the culture of the region as they spin to the sound of flamenco guitars and set their sights on a maximum jackpot of 1,200x their stake.

Unique symbols to feature in the game include roses, hand fans and castanets, but the real money-maker is the handsome vaquero, who acts as a substitute wild. Filling in for any regular base game icon, this special character can help increase the slot’s payout frequency by completing winning lines.

Also of great importance is the black stallion scatter symbol, which is used to trigger El Andaluz’s main bonus feature. Activated whenever three or more scatters appear anywhere in view during a single round, players will be treated to 12 Free Spins which take place on an even more lucrative set of reels.

When the feature is active, the importance of the vaquero symbol becomes even more significant, as it will now act as a sticky wild and lock in place for the remainder of the Free Spins. Given the frequency with which these symbols hit, it is therefore possible for players to have multiple sections of the game’s 5×3 reel matrix wild for the duration of the feature, making it far easier to land bigger prizes.

As an additional incentive, any regular payline wins that are collected during the base game can also be increased via the slot’s gamble feature. Should players decide to risk their winnings using this optional extra, they’ll have the chance to double or quadruple their prize by guessing the colour or suit of a hidden playing card; and subsequent gambles can be made until the maximum payout is hit.

With its sunny Spanish setting, simple gameplay and rewarding Free Spins feature, El Andaluz looks set to provide the perfect winter warmer for players this Christmas – and the team at Swintt is confident that it will prove a hugely popular alternative to the studio’s range of holiday-themed slots.

David Mann, Chief Commercial Officer at Swintt, said: “Having recently re-released Golden Reindeer and debuted our new Santa vs Aliens slot, we thought it was important to offer players a change of scene this Christmas in El Andaluz.”

“Boasting big wins and popular features like Free Spins and sticky wilds, we’re sure players will welcome the opportunity to banish their winter blues by galloping through the hills of southern Spain in the latest slot adventure to come from our hit studio.”

El Andaluz which players can try out at LeoVegas Casino which is accredited here on Casinomeister, follows hot on the heels of their festive slot release Santa vs Aliens.