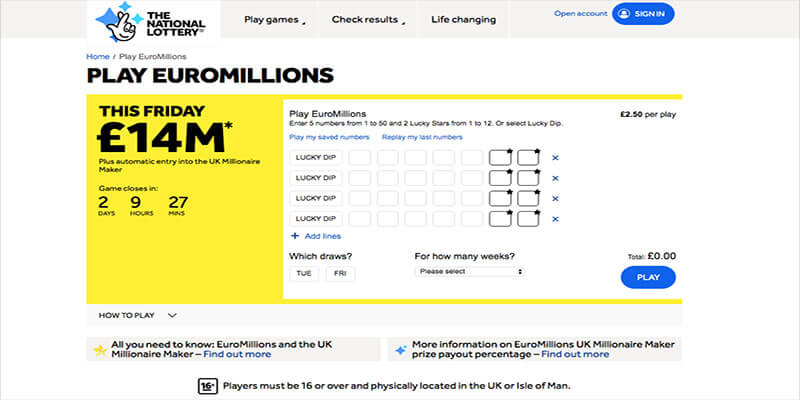 A very lucky ticket holder from the UK has won last night’s EuroMillion Jackpot Prize of £123m,  becoming in the process the third largest lottery winner to hail from the UK.

The numbers of 25, 27, 39, 42 and 46, with 11 and 12 being picked for the Lucky star numbers,  were drawn last night and the jackpot prize has at the time of writing not been claimed. It is not known therefore, whether the winning ticket belongs to an individual or is owned by a syndicate.

If the owner of the ticket is an individual, the prize of £123m will see them enter the top 1000 wealthiest individuals within the UK, according to the Sunday Times Rich List.

The EuroMillions Lottery is currently played in nine European countries, however, so far four of the largest jackpots awarded in 2019 so far have gone to individuals who purchased their tickets in the UK.

However, last night’s jackpot is still some way off the largest ever lottery win to occur in the UK, being some £40m short of the win scooped by Scottish couple Colin and Chris Weir, from North Ayrshire in Scotland. Back in 2011, they won a staggering £161m whilst playing the Euromillions. The Weir’s subsequently used part of their fortune, some £2.5m to the Yes Scotland campaign, in the run up to the 2014 Scottish independence referendum.

Whilst the amount of £123m won last night is a mind blowing sum, it pales into insignificance compared to some of the lottery prizes awarded in the United States. Only last week a lucky ticket holder from California won in excess of $500m whilst playing Mega Millions, although in the UK lottery, winnings unlike the US, are not subjected to tax.

The next EuroMillions draw is this Friday and the jackpot on offer has been reduced to £14m.