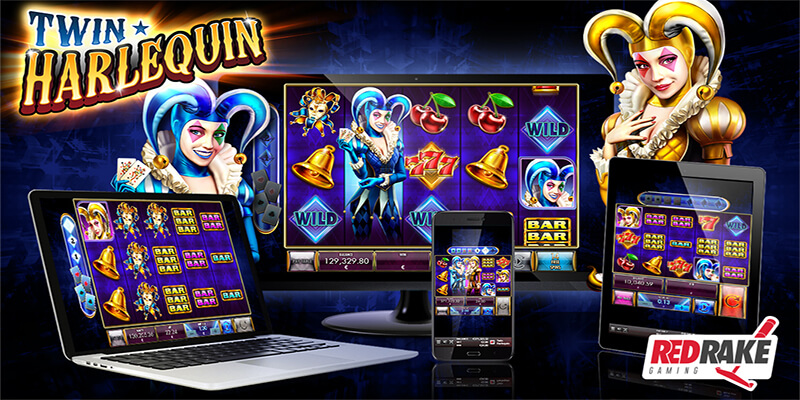 Earlier this week the casino game developers Red Rake Gaming went live with their latest slot game, Twin Harlequin, a 5 reel, 3 row online slot machine that features 25 paylines and a reported RTP of 95.2%. With the RTP, possibly putting off players as it is slightly on the low side.

However, this slot game  does include the well-known “Cascading Reels” feature, which can also be found in several of the company’s other video slots, such as The Asp of Cleopatra or Tiger and Dragon.

Twin Harlequin combines striking and colourful symbols with two cheerful harlequins who may appear stacked on the first two reels and are responsible for handing out juicy direct wins or more than 100 free spins through an exciting mixed roulette.

In order to access the “Harlequin Roulette” you will need to collect 5 or more Respins in the same spin, which will build up in the colourful side bar. If you don’t manage to collect the 5 Respins that you need, the bar will be cleared and you will start over again.

Once players enter the roulette mini game there will be two roulettes, one controlled by the yellow harlequin, where players can get instant wins, and another with the blue harlequin, where they can win more than 100 free spins. There is also a chance that both of the harlequins will appear at the same time, so the player can get wins from both of them.