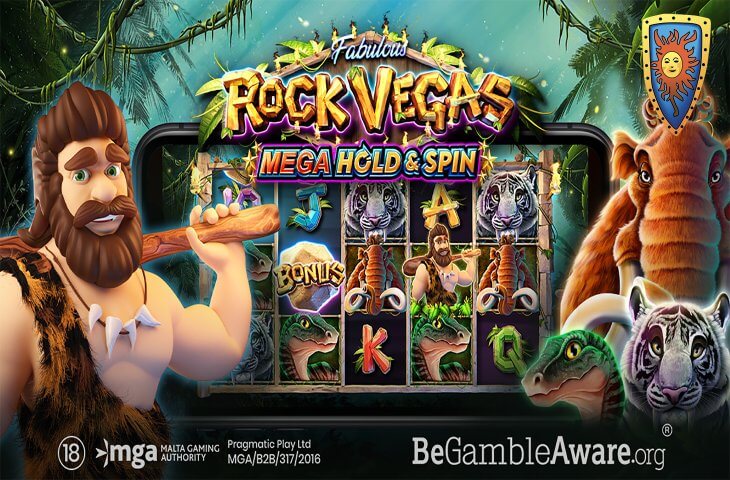 The Malta based casino game studio Pragmatic Play who are brains behind the popular Social Tournaments, which we have in the past featured here on Casinomeister and who are also renowned for releasing up to five new games a month, have today announced the release of Rock Vegas.

Rock Vegas is billed as a ‘Captivating journey through dense prehistoric jungles‘ by Pragmatic Play and the slot is classed as a high variance slot game, with a default RTP of 95.6%.

Available to play at accredited casinos here on Casinomeister to include the likes of Videoslots and All British Casino, the release of Rock Vegas is Pragmatic Play’s fourth new game release of 2022 so far.

Commenting on its release, Yossi Barzely the Chief Business Development Officer at Pragmatic Play had this to say about Rock Vegas: “Rock Vegas™ provides players with a thoroughly exciting experience, as well as a unique selection of bonus features that complement each other nicely.”

“The prehistoric theme, in conjunction with the modern reels and engaging bonus features, stays true to our ethos of creating fantastic games and we can’t wait to see how our players respond!”

With a potential maximum win of 10,000 times your bet stake, this 5 reel and 3 row video slot should appeal to many a slot fan, especially those who like to up the ante a bit and play high variance slot machines.