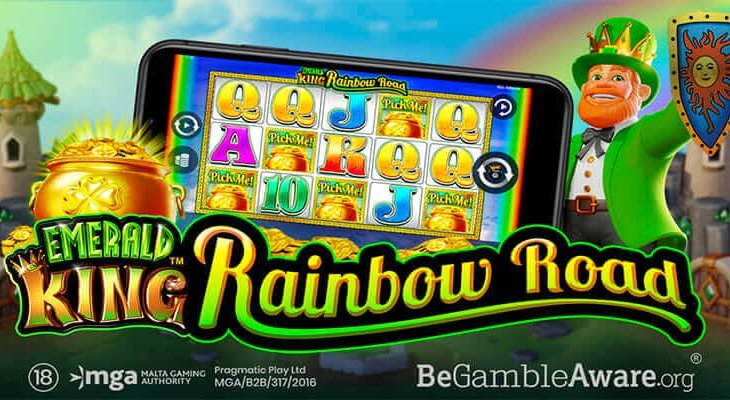 With an RTP of 96.71%, Emerald King Rainbow Road which has 20 paylines in play, this highly volatile slot sees players return in search of untold riches in the Kingdom of the Emerald Isle. The slot that boasts a maximum potential win of 20,000 times your bet stake, also incorporates three separate bonus feature game rounds that can be unlocked by players.

The features in question are the ‘Rainbow Road Feature’, which is activated when the leprechaun scatter symbol lands on reels number 3, 4 and 5. Players are transported to the ‘Rainbow Road’, offering cash prizes or x number of spins. If you are fortunate enough to get to the end of the road, this is where the potential of winning 20,000 times your bet stake comes into play.

The second such game feature is ‘Scatter Eliminator Bonus’, awarded when the 3 pots of gold scatter symbols hit on reels number 3, 4 and 5. The prize won is revealed by the the amount revealed under the pot of gold symbol on reel 5.

Lastly, there is the ‘Emerald King Mini Slots Bonus’, this is a random bonus feature in play and is activated when all reels turn green. This then starts up a mini-slot machine in the middle of a reel, which can pay out huge amounts if Lucky 7s line up.

It certainly seems that there is no let up at Pragmatic Play as they continue the break neck pace of new game releases in 2021, which saw them release up to 5 new casino games every month throughout last year.

“Jam-packed with features and the chances of winning a staggering 20,000x your stake, player’s will be hoping for a fruitful trip down the Rainbow Road.”

On our online casino reviews pages here on Casinomeister, you can find numerous casinos we have marked as accredited that carry game content from Pragmatic Play. One such online casino which has Emerald King Rainbow Road is Rizk Casino of which you can sign up to here.