"Too many complaints - no pay"

"Too many complaints - no pay" 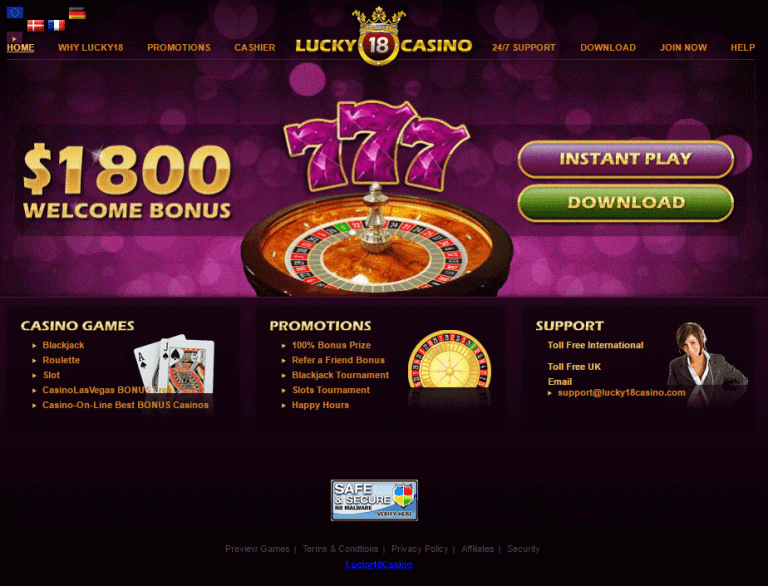 Lucky 18 casino hasn’t been so lucky – at least to many players who have related issues with this casino: slow pay – no pay, nonresponsive customer support, lost documents and emails. The list goes on. Here are a few examples – some were solved after contacting the casino, some were not:

The Problem: lucky18 online casino refuses to payout winnings, i hit a random jackpot($5600) back in november,all requirements were made,requested a $2000 cashout. it was approved a month ago. then they would not respond to my emails. after 8 tries they finally told me the winnings would be in my bank account dec 8th- it never appeared- after 6 more tries to reach them, they told me everything was taken care of and the money would be in my account in a couple of days,its been over 2 weeks now!!(and of course nothing happened)

now they will not respond at all.some review sites think they are taking deposits but not paying out because they are closing shortley. what other options do i have before they close??? i have already filed a formal complaint with rtg etc. also if you know of any other casino review sites i can contact let me know-so other players don’t get ripped off by this lucky18 casino.

The Problem: I was given what was presented to me as a gift for 60.00 and won maybe 2,000 but played down to 1300. and requested an express overnight withdrawal, which was supposedly approved 3/2/10, I requested 2/16/10. When I called to see what was taking so long I was told I needed to put in another faxback form, so I did, then I was told my winnings were approved, and this is two weeks later when sebastian tells me my 60.00 gift wasn’t a gift and took it out of my account which at the time through me in overdraft, I still haven’t received the 1300.00! But he was sure to pull out of my account my gift of 60.00!!!

Sebastian (the manager) gave me a FT # and it was bogus… its the same story he has given other people..

The Problem: I am owed $7200.00 by lucky18 casino. I won the money in june 2009. I immediately sent in my faxback form which was approved on 7/3/09. The withdrawals were all approved by 7/22/09. Although I have numerous emails and copies of live chats saying that the money is definitely coming, I have not received one penny of it. Their initial plan was to send $2000.00 per week for 3 weeks and then $1200.00 the last week. Becuse it took so long, I was told That it would all be sent together the last week in August 2009. I have the emails from Ian, the account manager stating this and also have printed copies of my account history.

This past 6 weeks,there is just an answering service when I call the support telephone number.For the past 6 weeks, no one answers my emails or calls back even though I am told someone will get back to me.

Most recently I sent a private message to kingnaff via this website, as it appeared that was the correct procedure suggested by the the casinomeister.

Lucky18 has my email and telephone number. They have assured me payment of the $7200.00 and yet have sent me nothing at all.

I would appreciate anything that you could do to help me.

The Problem: Im waiting for 3 months $2000 payment from Lucky 18 casino. Have been in contact with Sebastian manager of this casino. They cant transfer money to my bank. Last time we spoke, he told me that send money via western union. But now I cant contact Sebastian anymore. And my withdrawal for $2000 I dont recive. Live chat dont work, email not answer, by phone only promise to call me back.

What is with Lucky18?

The fora is full of other player issues and disappointments.

Do yourself a favor and avoid this casino at all costs.

Do yourself a favor and avoid this casino at all costs