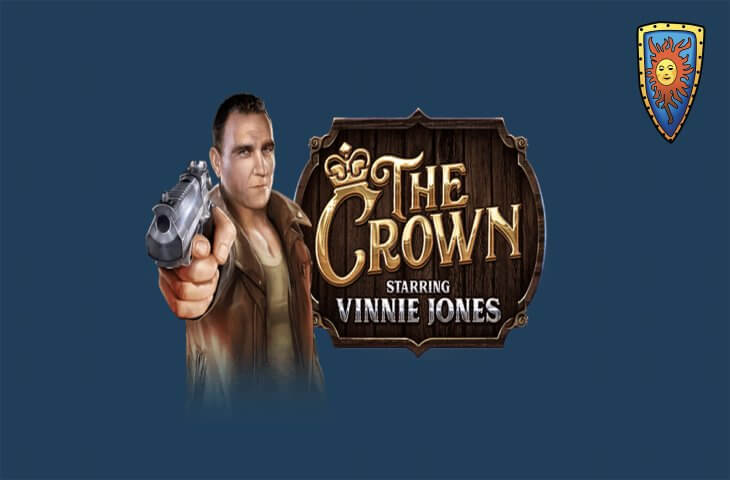 No no, don’t get confused with the award winning Netflix serial that chronicles the reign of Britain’s Queen Elizabeth II, we are talking about the latest slot game from the casino game provider Swintt, which stars the former Wimbledon FC footballer turned Hollywood star Vinnie Jones, in Swintt’s latest slot game The Crown.

Players of The Crown are invited to assemble their crew, plan your approach and spin your way to top prize of 12,000x your stake in The Crown starring Vinnie Jones – the brand-new heist-themed slot from award-winning software providers Swintt that comes locked and loaded with four different base games.

Known for his all-action on-field performances and a star turn as “Big Chris” in Guy Ritchie’s iconic British gangster movies, Lock, Stock and Two Smoking Barrels and Snatch, The Crown sees former footballer-turned-actor Jones use his considerable stage presence to light up players’ screens in a much-anticipated release that takes place across four exciting fictional locations throughout the UK.

Boasting a unique line-up of symbols that includes pints, playing cards, guns and crew members, The Crown enables players to travel to one of four base game venues as they build a team and plan their raid on London’s famous Crown Jewels. Players can navigate between the titular The Crown pub, Michael’s Whiskey Tavern, The Bullseye and The Drunken Duck, each of which offers its own unique wild symbol.

Starting with The Crown, any wilds that appear will expand to fill their reels as a potentially lucrative re-spin is triggered. Clicking the car icon will then let players hop over to another location, with Michael’s Whiskey Tavern featuring sticky wilds that remain for up to five spins, The Bullseye boasting 4x multiplier wilds and The Drunken Duck offering random wilds that can fill the reels for gigantic wins.

Of course, jumping from meeting point to meeting point is just the preamble to main event, with The Crown Caper feature being triggerable from any location when three or more jewel scatter symbols appear. When this happens, players will be taken to a new screen where they’ll get to pick from four rows of cards to put together a crew and collect Free Spins that benefit from massive prize multipliers.

At the first level, The Crown Caper feature offers players eight Free Spins with a 3x multiplier applied to all wins. However, providing their pick reveals a crew member, players will advance one row up the grid to unlock even greater rewards. At the top of the pyramid, players can earn 12 Free Spins with a 7x multiplier, but revealing a police siren at any stage will end the picking phase and start the feature.

Naturally, planning the perfect heist is all about timing – and if players don’t want to wait to trigger the main bonus from the base game, they can access it immediately using the Buy Feature option. Available for an additional wager of 75x their selected stake, using this shortcut will instantly transport players to the pick screen, increasing their chances of landing the game’s maximum win of 12,000x.

Despite being cast in tough guy roles throughout his film career, these days Jones is better known for being an avid philanthropist with a heart of gold. With this in mind, Swintt is delighted to announce that it will be celebrating the launch of The Crown by donating a portion of the game’s future revenue to Jones’ non-profit organisation of choice – the Royal Brompton and Harefield Hospitals Charity.

David Mann, Chief Commercial Officer at Swintt, said: “This month, Swintt is inviting players to lock and load for a daring heist on London’s best-known treasure in our ambitious new release, The Crown.”

“Featuring an unforgettable performance from iconic actor, Vinnie Jones, The Crown is the first game in the Swintt catalogue to include bonuses spread across multiple base game locations. With each offering a special wild with its own unique perk, there are multiple ways for players to win big as they put together their crew and prepare to land the score of a century in the main Crown Caper feature.”

Being depicted in The Crown is not the first foray into the world of iGaming from Vinnie Jones, back in February we reported here on Casinomeister News that the self styled ‘Hard Man’ was to become the first celebrity dealer for the live casino game specialists Real Dealer Studios.

To try out The Crown for yourself, head along to our review of Winz.io Casino who are currently undergoing the Baptism by Fire process and feature many games developed and provided by Swintt.