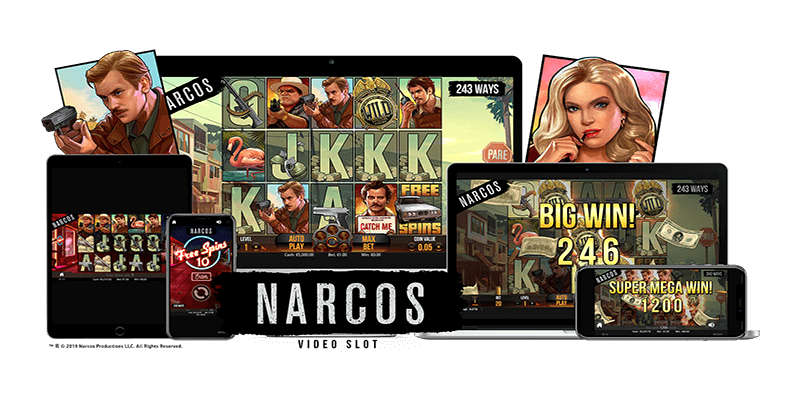 NetEnt seem to be going all out to continue with new game releases, after their hotly anticipated release of Dead or Alive 2 last month, which got slot players talking and playing.

Well the month of May is no different and sees the release of two potentially popular slot games in the form of Arcane Reel Chaos and the Narcos video slot.

Arcane Reel Chaos looks on the surface to be a decent offering from the Swedish game developer and it  is a 5- reel, 3-row, 20-line video slot. With NetEnt describing it as set in a dystopian futuristic world, and steeped in the occult. Featuring  four fearless friends set out to protect their city from the wicked Deep Pockets – and destroy the scatter symbol that turned him into an evil maniac.

Indeed forum member Harry_BKK confirms that Arcane Reel Chaos is actually using the same game engine as the South Park 2 slot game, that until recently NetEnt had the licence to. You can by all means check out the forum thread in question here, where Arcane Reel Chaos is discussed.

The other slot that has just been released by NetEnt is Narcos, which like Arcane Reel Chaos has already generated discussion here on the Casinomeister forum. To jump in and join the discussion just click here.

Based on the multi-award-winning crime drama from Gaumont, the five-reel, three-row video slot with 243 bet ways has the battle between the police, DEA and drug lords as its backdrop.

After the launch of Narcos, Bryan Upton, Director of Games at NetEnt said: “Since we first announced the deal with Gaumont to bring Narcos to the reels, the anticipation among players and our operator partners has been huge. We are confident that the game will more than live up to its lofty expectations and add an exciting new option to our unbeatable branded catalogue.”