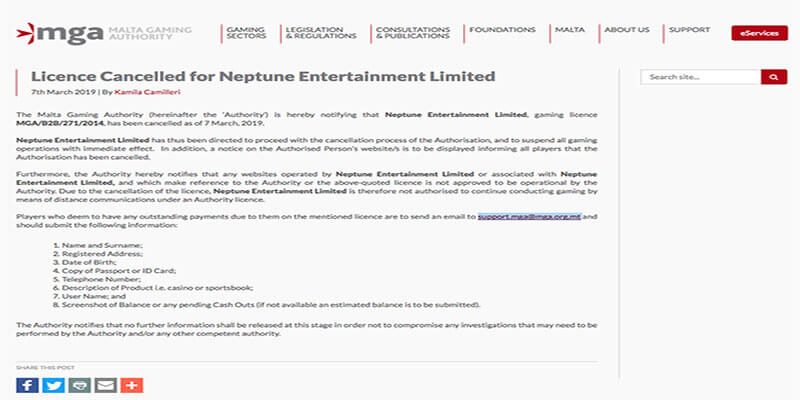 The Malta Gaming Authority ( MGA ) announced yesterday ( 7th March 2019 ) that they have revoked another licence from one of their operators, with Neptune Entertainment having their licence removed.

Neptune Entertainment Limited which held the  gaming licence MGA/B2B/271/2014 and according to the MGA Register is associated with Triton Gaming Limited, is now no longer able to service players.

Any players at the properties of companies associated with Neptune Entertainment who have issues withdrawing funds, should in the first instance contact the MGA on this email address: support.mga@mga.org.mt – Providing the licensing authority with the necessary information so as they can identify your player account.

Upon further investigation it has been quite difficult to find the properties that are associated with Neptune Entertainment and Triton Gaming. Apart from a link to a site called casino-triton.com which appears to be a holding page on a WordPress theme.

This action by the MGA, follows action they took on February 19th last month, which saw three MGA licence holders having their licenses cancelled by the authority.