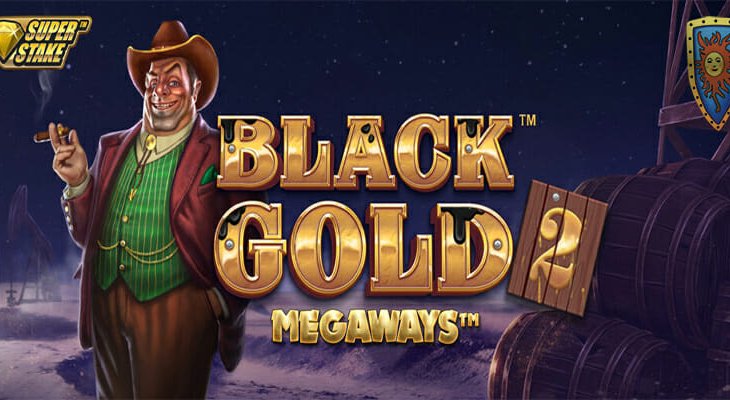 The richest oil tycoons in the West are back in the second instalment of Stakelogic’s chart-topping slot, Black Gold™ Megaways™. In Black Gold™ 2 Megaways™, players are once again tasked with digging for oil and riches as the Megaways™ reels cascade and deliver 117,649 ways to win with every spin.

Players must set up the rigs and use the dynamite to destroy all the lower symbols in this six-reel Megaways plus 7th Horizontal cascade video slot that has a bonus eighth reel that sits on top of the main reels.

When one of the Bonus Feature symbols lands in the central section of the bonus reel, one or more valves from the pipe that runs across the bottom of the reels opens and spits oil onto the main reels.

Any reel that is hit by the oil will receive the bonus indicated by the Bonus Feature symbol that landed in the reel that sits at the top of the game window.

The chance to hit black gold doesn’t stop there – if four or more Scatter symbols land anywhere on the reels, the Free Spins bonus is triggered with a Multiplier active for the duration. Players are then given the choice of how many Free Spins and the size of the starting Multiplier they would prefer. This includes:

During the feature, the win Multiplier increases 1x with every cascade and if three or more Scatters land, the bonus Retriggers. While this in itself can make players rich beyond their wildest dreams, the Gold Rush Bonus is what separates the wealthiest oil tycoons from the others.

This includes The Gold Bonus where another Bonus symbol is added to the reels and the Extra Spin, which resets the number of Respins to four for the rest of the feature.  Black Gold™ 2 Megaways™ is hooked up to Stakelogic’s Super Stake™ feature, and players can also Buy the Bonus in the markets where it is permitted to do so.

Olga Bajela, CCO at Stakelogic, said: “Black Gold™ Megaways™ took the market by storm and with the second instalment we have taken the gameplay to the next level.”

“We have packed the game with features that will help players in their quest to find oil and secure their own riches, including Free Spins, Respins and Multipliers.”

“This is a hugely exciting slot that offers plenty of ways to win with every spin – we think it has the potential to be even more popular than the original thanks to the thrilling gameplay.”