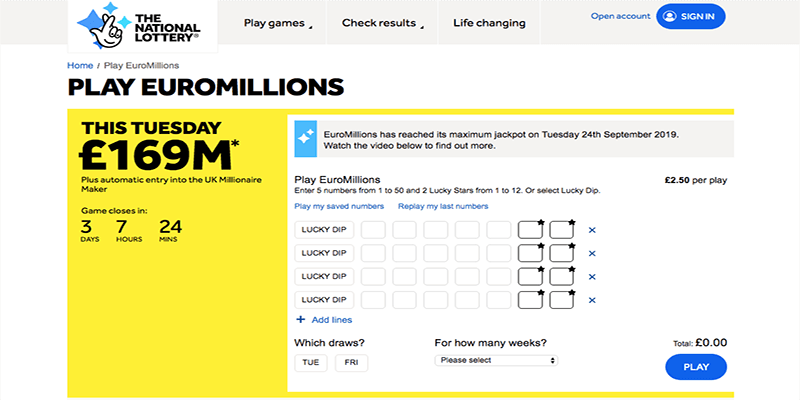 As that is now the jackpot total that is available playing the EuroMillions lottery, which yet again last night failed to be won and now the prize stands at the highest amount it will go for.

Obviously if you live in the UK this amount could fluctuate somewhat based on exchange rates, which could occur, especially considering all things brexit in the UK are continuing to put the financial markets in the UK on a knife edge.

Over the past few weeks and months, we here at Casinomeister have been watching the EuroMillions twice weekly draws with a keen interest, as it continues to rollover, now to the stage where it has reached the maximum jackpot prize available. A cool €190m or on today’s currency exchange markets equating to £169m.

If a player from the UK is fortunate and lucky enough to win the jackpot on offer, then instantly they will become the biggest lottery winner ever in UK history. In addition they will find themselves on the pages of the next Sunday Times ‘Rich List’. That is, unless they manage to blow their newly found fortune before the Sunday Times gets around to updating their much read list!

For point of reference for anyone who had a ticket for the EuroMillions draw that was held last night, whilst you won’t have won the jackpot, you may still be a holder of a winning ticket. The drawn numbers being: 24, 37, 41, 43 with lucky stars of 02 and 08. The UK Millionaire Maker code being HRFV43986.

You could in fact be a millionaire as by checking the prize breakdown for last night’s draw, 4 multi millionaires were made, with two tickets being purchased in the UK, that matched five numbers and one lucky star.