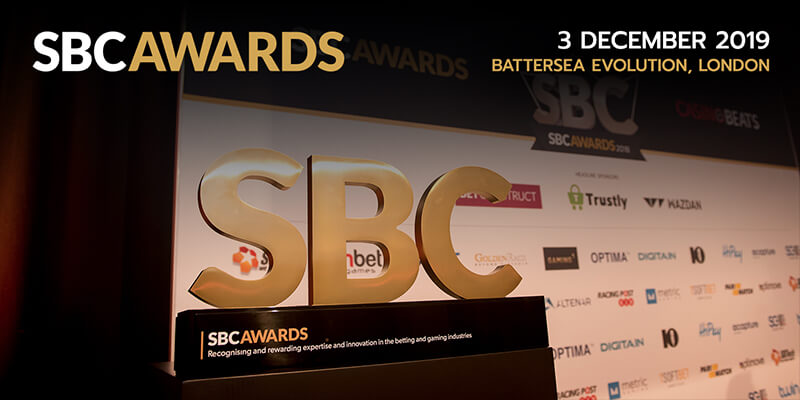 Betsson Group lead the way in the most competitive ever SBC Awards, featuring in no fewer than 11 categories when the shortlists were unveiled today.

The winners of the 41 categories will be announced at a lavish ceremony in the stunning setting of Battersea Evolution, London on Tuesday 3 December 2019, in front of an audience of more than 700 sports betting and igaming industry professionals.

Among the awards Betsson Group will be hoping to pick up on the night is the prestigious Sportsbook of the Year, but they will have to defeat operators from around the world to do it, with bet365, FanDuel Group, FavBet, GVC, Pinnacle, Sky Betting & Gaming, Sportsbet.io, STS, Vbet and William Hill all in the running.

Meanwhile, BetConstruct feature heavily in the supplier categories, appearing on the shortlists for 9 awards, while there are also multiple nominations for the likes of Scientific Games, Trustly, Optima, Golden Race, Betradar, Playtech, Vermantia, EveryMatrix, OKTO and HiPay.

Andrew McCarron, Managing Director of SBC, said: “We received a record number of entries for this year’s SBC Awards, with operators, suppliers and affiliates from around the world keen to achieve recognition for their hard work and innovation. Most importantly, the standard of the entries is superb, so we have twice the number of nominations and a tenfold increase in quality.”

“I can’t wait to see which companies emerge as winners at the SBC Awards ceremony, which is always one of the most enjoyable events of the year.”

The winners of the Operator and Affiliate Awards will be chosen by the industry, with everyone who attended this year’s Betting on Football and Betting on Sports conferences eligible to vote. However, the Supplier Awards will be decided by a panel of judges, who have been handpicked for their ability to identify the potentially industry-changing innovations among the entries.