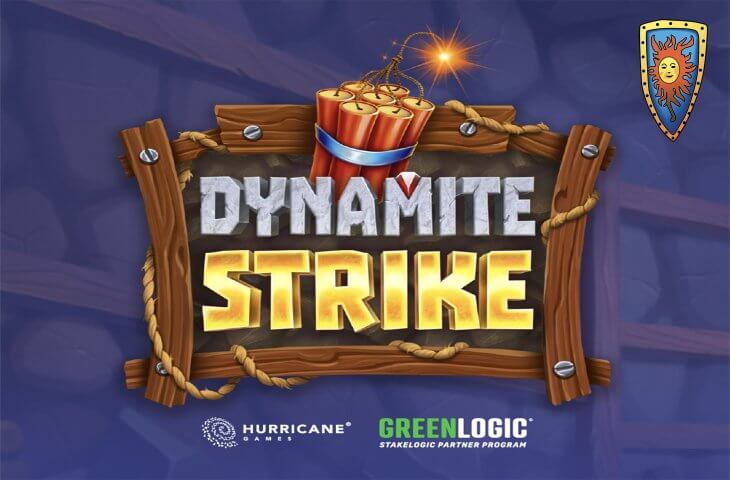 The casino game developer Stakelogic are giving slot players the chance to blast their way to a potential fortune in the latest game to leave its Greenlogic® Partner Program production line.

Developed in partnership with Hurricane Games, Dynamite Strike sees players grab sticks of Dynamite and venture deep into the gold mine.

In the base game, any winning combination triggers one Respin and with each Respin, two stone blocks are removed from the reels and the number of ways to win increases. Bonus Cart symbols are revealed behind each block before the Respin gets underway.

As the name suggests, each cart contains a bonus. This could be a Multiplier with x1 added to the next Respin or it could be a Coin with the value of the coin added to the total win. But players might be a little unlucky and reveal a duff cart which contains no bonus.

If the player can destroy all of the blocks, they will be rewarded with five Free Spins. The total Multiplier from the base game is carried over to Free Spins, which are played with 3,125 ways to win. The Multiplier then increases by x1 with each Free Spin.

While Free Spins are active, any Wild symbols that land add to the Retrigger Collection. If four Wilds drop, two Free Spins are added but if eight Wilds appear the player receives an additional five Free Games.

Dynamite Strike also features Stakelogic’s innovative Super Stake™ which essentially lets players double their stake to be in with the chance of triggering a bonus which in turn can lead to some crazy win combinations. In this game, it removes the duff cart from the Bonus Cart feature.

Salvatore Campione, Head of Greenlogic® at Stakelogic, said: “Dynamite Strike has been designed to offer truly explosive gameplay and that it most certainly does. Players will want to venture down into the gold mine in search of Wilds, Multipliers, Free Spins and those all-important Bonus Carts.”

“This is yet another great slot developed in partnership with Hurricane Games via our Greenlogic® Partner Program. I look forward to seeing players grabbing their sticks of dynamite and returning from the mine with plenty of gold.”