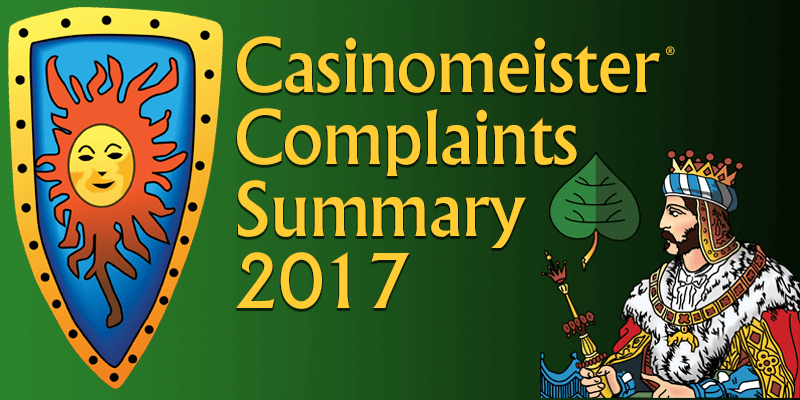 From the desk of Max Drayman:

What a year! 75% more cases. Almost double the amount of monies recovered for players. Needless to say I’m pleased with the overall results, but also acutely aware that we hit a speed-bump or two along the way. Let’s look at some details.

So, why the dramatic increase in PAB numbers? At first I thought it might be due to our wonderful selves doing such amazing work that the punters were just following the golden light to our doorstep. While that is no doubt true 😉 it seems that other complaint services have seen similar increases so perhaps it’s more a matter of players having become more aware and/or willing to use whatever complaints options are available. Still, hell of an up-tick in the overall numbers!

Another trend that manifested itself stronger than ever this year is players “shot-gunning” the complaints services. By this I mean players dumping their complaint on as many services as will accept it and letting it get resolved wherever. Needless to say this pretty much sucks for everyone but the player because we end up duplicating effort, working on issues that may have already been resolved, never hearing back from players who have moved on, etc. Our numbers show this in spades! Can’t blame the players though, the game is tough enough as it is so making use of all the options available to them can obviously look like the smart thing to do.

Last year I’d made the bold pronouncement that the UKGC might be moving away from the ADR (Alternate Dispute Resolution) model and that proved to be spectacularly wrong. While I have no insight whatsoever into the UKGC’s planning process it would certainly seem that their attention has been focused elsewhere this year. And the casinos with UKGC licenses have pretty much climbed on the ADR band wagon en masse as reflected in the strong up-tick in cases that ended up with “take it to the ADR” results. That’s always disappointing for us and the players but the UKGC is calling the shots as far as UK licensees are concerned so it is what it is.

While I’m on the subject of the UKGC I should mention that this year, again, they’ve proven to be the jurisdiction with the strength and the courage to push for real and meaningful change. It’s hard to look at what they’ve said and done this past year, and are continuing to do, and not think “it’s about time!” Some commentators take their moves against casino misbehavior and bad practice as being hostile to the industry but I reckon players have and will feel rather differently about that. Casinos have gotten away with a shopping list of bullshit for as long as I’ve been in the industry — 20 years! — and I for one am well encouraged to see (some of) the bad boys finally being called out for it. UK players can look forward to better days because of what the UKGC is now expecting and demanding of their licensees.

One of the elephants hidden in the numbers this year has been the number of PABs being generated by the Virtual group since their move out of Costa Rica and into Eastern Europe. A touch under 10% of our cases came from casinos within that group alone and it has to be said, that’s pretty outrageous. HOWEVER, the amount of money we recovered for those players was a significantly larger proportion of the total. So while that group has obviously had its problems they’ve also clearly got a dedicated team working hard to make things right. I hate that we have to chase and threaten them to get things done but the point is that they do, eventually, with enough prodding, get done and players get paid. So a bitch-slap and a pat on the back for them, so to speak.

Keen-eyed readers will notice the number of unresolved cases at year-end has shot up, almost four times what it was last year. Suffice it to say that we’ve had some growing pains because of the increased work load and site changes. We aim to get all that under control in the coming months. Our spiffy new Ticket system for the PABs should help with that.

I should also mention that in December we finally moth-balled our old PAB submission form and switched over to the aforementioned Ticket system. The dip in PAB numbers at year-end reflects this (down time, working the bugs out of the new system, etc).

Well, I reckon that’s enough verbiage from me. Max out.