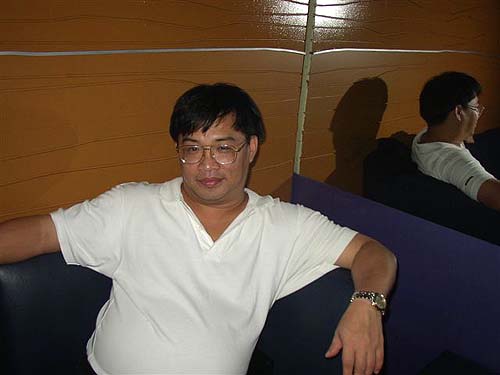 Where do I begin?

It’s tough writing about losing someone you care about – especially when this person is taken from us too soon. We’ve lost a great friend this week. But getting through the pain, there are many things I feel obligated to share with everyone – especially those persons who were close to Ted.

I started this business a little over twelve years ago, and like anything new (e.g the online gaming industry) there weren’t too many people out there who knew anything about it. I was more or less a newbie webmaster, I had only been doing webdesign for a handful of years, and there was always much to learn. Ted was a member of our forum, and was one of the first contributors to our newsletter back when we searched for people to contribute. I learned a lot from Ted.

We chit-chatted quite a bit via email and the Casinomeister chatroom, and it was in January 2001 that he convinced me to go to a conference; the ICE in London to be precise – and this is where we first met.

All profits derived from this link go directly to Ted Loh’s family:

It was a little over a week ago that I decided to go; the International Casino Exhibition in London. Actually Spearmaster (www.Got2bet.com) was the one who talked me into it. And after a bit of tossing the idea around I thought, “Oh what the heck, I’ll go.” I’m glad I did.

After about a six hours worth of train rides and a one-and-a-half hour flight, I made it to my hotel, coincidentally the same Hotel where Ted Loh (aka Spearmaster) was residing. We met up and had dinner that night at a local Indian restaurant and paid way too much (you know you’re in trouble when the waiter spreads the cloth napkin in your lap for you).

We had a very nice conversation about the pitfalls of webmastering casino information sites, shared tips on building traffic, positioning ourselves amongst the other “big dogs,” and numerous other subjects concerning the online gaming world. But what was most pleasing was the mutual agreement we had in which we felt a sense of responsibility that we have toward our visitors. There are hundreds of portals out there that have no scruples whatsoever. They are only concerned with driving traffic to their affiliate sites, no matter what the cost.

Ted and I both agreed that this is a problem, a big one.

When I got back, he had written me:

Just wanted to quickly touch bases with you after London. I had a really nice time with you and enjoyed talking about the different aspects of webmastering casino information sites like ours. Really think we have some of the best sites out there and should do whatever it takes to support one another. We should brainstorm a bit more on this.

This conference was the seed of tradition: for years after this, we made an effort to book the same hotels together so we could hang out. We were pretty much inseparable – we’d have meals together, meet up with the same casino operators, go to the same parties. A lot of people thought we were business partners, but we weren’t; we were fellow webmasters who shared a common interest and were driven by the same motivations.

Some may think we were alike – but we weren’t. Sure, we were both ex-pats, both had lived in California but now lived on opposite sides of the world. He in Thailand – me in Germany. And we were a jumble of opposites: he liked Coke, I like beer; he smoked, I didn’t; he was short, I’m tall; he was outspoken, I’m laid-back; he liked football (soccer), it bores me; he wore polo shirts, I don’t own any; I was into metal, he liked oldies. But our love for sushi always bonded us – or just eating in particular – and the enjoyment of one another’s company was enough.

In September 2001, we met in Vegas. It was my first real trip to Vegas which was business related. I was attending the G2E and getting a feel for this industry – Ted can take credit for showing me the ins and outs of the casino – introducing me to video poker and slot machines. He gave me a rundown on how video slots worked, and Texas Tea was the instrument of his instruction. I haven’t been the same since.

Every year we traveled back to Vegas – this being our pilgrimage. Staying at the Luxor, Aladdin’s, Excalibur, and numerous times at the Wynn. He had the worst luck at times, and sometimes he just couldn’t lose. His quirks were amusing – he was convinced that certain slot machines needed to warm up before hitting big. Of course they would hit big after he left his seat and someone else had taken it – like me.

One dramatic moment happened at Aladdin’s Casino (now Planet Hollywood). I was watching him play 100 hand Deuces Wild video poker at $5 a game; his funds were running low during this bout – losing some, winning a few, losing more, until he was playing about 7 hands out of the 100 hands he was playing minutes before = only pennies left. Suddenly he drew three deuces pat. I never seen him so pissed – and so dramatic. He jumped from his seat, hands flung in the air – he stormed in circles shouting expletives. I made a lame (unsuccessful) attempt to stifle my laughter, but it was one of the funniest displays of slot-rage I had ever seen.

When the Tsunami of 2004 struck – with Thailand getting the brunt of it, Ted went to work setting up a website to assist people to find their loved ones. It was an emotionally draining task – uploading hundreds of photographs of those killed by the floods. He worked tirelessly and I admired him for that. I knew there was more that we could do; this industry has deep pockets. So Ted and I conceived a way to help those who had been devastated by this tragic event. We auctioned off the top left hand corner of our websites (Casinomeister and Got2bet). The highest bidder would have those ad spaces for one full year, and 100% of the winning bid would go to a charitable organization. Partnerlogic was the top bidder with $110,000 as their winning bid. This went straight to Unicef – Ted and I were elated and came to realize that webmasters like us could make a real difference in people’s lives.

Ted eventually sold Got2Bet and at one point ended up working for Playtech. He convinced some of the top executives that my wife and I ought to head out to Macau to get a feel of what was happening on the other side of the world, and they paid our way to the next Asian i-Gaming conference. It was our first trip to Asia – and Ted was our Hong Kong guide showing us the sites and introducing some of the foodstuffs Hong Kong had to offer. I ate a frog for the first time. Ted and I met with a number of industry related people in Macau as well as in the Philippines. From there we made tentative plans to vacation together in Thailand – specifically Phuket.

It was about a month later when our families joined up in Thailand. He coaxed me into eating a fried grasshopper from a street vendor in Bangkok. It wasn’t so bad – sort of like smoked shrimp, but crunchy. From there, we spent a couple of weeks together at a beach resort in Phuket.

The hotel charged a high rate for wireless Internet access – which we both thought was absurd. But Ted being the gifted techno gee-whiz guy cracked the Hotel’s secure wifi access. Their password was the default 12345678910 – I can still hear him laughing about that. We had free Internet for the entire stay.

One thing that I learned from this trip was why Ted chose to make Thailand his home: he loved the shopping. You could buy just about any gadget imaginable, and the food there was awesome.

London was another port-of-call for us. We spent endless hours hanging out in pubs, sushi restaurants, traveling the tube, and chilling out at the International Casino Exhibition at Earl’s Court. A number of firms sponsored a party celebrating my 50th birthday in 2008. Ted showed up; he flew halfway around the world to make it. This is one of the subtleties of Ted – he always seemed to be around – you got used to seeing him everywhere.

And then of course were the annual Meister Meetings…

Ted was a tell-like-it-is kind of guy. He was honest, and if you weren’t sure about something, he’d definitely have an answer for you. I wish I had a nickel for each time I heard him announce “Bullshit!” in response to a software or player issue I might be discussing with him. Sometimes you didn’t want to hear what he had to say, but that’s what friends are for – being honest and upfront. At least we learned to laugh at ourselves and not take ourselves too seriously.

We don’t know what we’ve got until we lose it. So true with Ted. Ted was a pioneer in the online gaming industry. From every software provider, game developer, affiliate, affiliate manager, payment processor, to every player; Ted Loh had an influence with every aspect of gaming. The industry has lost one of its leading torchbearers and its loudest devil’s advocate.

But that’s all about work. In real life, I’ve lost a friend. His family has lost a husband, a son, a brother – a father.

Rest in peace buddy. You’ll live forever in our hearts.

All profits derived from this banner go directly to Ted Loh’s family:

Thread in our forum about Ted.