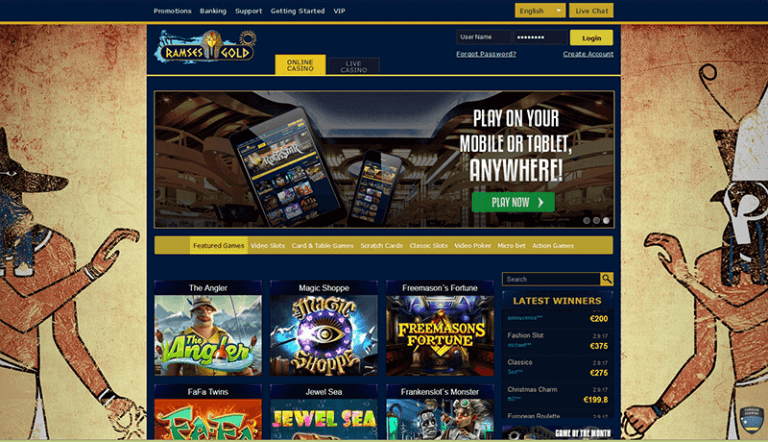 Ramses Gold Casino is more or less connected to the nasty brood of casinos – the Affpower group, which was caught in 2016 for using pirated software. They are definitely the underbelly of the online casino industry. Nasty individuals who would rather lie, steal, and cheat than play a fair game.

Ramses Gold Casino can be listed as one of these casinos – they share the same license:

Ramses Gold operates under Master License No. 1668/JAZ, granted by the Government of Curaçao.

Yet, they are taking punters’ money – illegally I might add. If you are taking bets from the UK and are not licensed by the UKGC, you are not only cheating the system – you are putting UK punters at risk. There is not due diligence and player protection that is required by UKGC licensed casinos.

So in essence, don’t walk away – run.

Credit card deposits will appear on your statement as Conan Ltd. This was also found at OceanBets.com Re: source code of OceanBets.com. OceanBets is directly connected to Affpower as well. You can read about this here: OceanBets Rogue Review

This casino is connected to the AffPower group of casinos which has been caught in the past using cheating software. Avoid at all costs.

Ramses Gold Casino is mobile friendly and will rip you off from there as well as your desk top.

I just had a little chat with the chat support at Ramses Gold Casino. Ramses Gold was pegged as being part of the toxic brood of crap casinos under the Affpower wing. It’s connected by a shared license.

Anyway, we have a PAB for these guys, and the operator came back to us stating that he was going to deal with thePAB, but he saw that his casino was being listed as an Affpower clip shot joint, and he was adamant that his casino has nothing to do with them. He didn’t want to deal with someone so biased. Fair enough, I know that casino ownership can be convoluted at times when people are playing shell games, so I decided to just check the casino out for myself.

I switched my IP to a UK IP address, and checked out their site. There is no UKGC logo or licensing information – fine, I’ll ask about it. So I went to their live support… read more

I made a withdrawal on Monday 14th August for 2000 euros. The following day, I received a fairly standard request for ID and other documents. After a back and forth exchange I provided all of the requested documents and received an email confirming all was okay. I requested to be paid by bank transfer and provided all of the information asked such as SWIFT/BIC. It is now 16 days later and despite having emailed them over and over I have not received any replies and I have not received my withdrawal either.

I have broken no rules and have received no phone calls, emails or other communication to explain why my withdrawal has not been processed. Every time I phone the contact number it says this service is busy please try later. Contacting Live Chat is useless as they always say “email support@ramsesgold.com” which I then do but still have no response.

This casino should be avoided at all costs.

Original or Fake?
Started by Perez777, 5 years ago
13
7864
Last post by slotsgeek
5 years ago
Do NOT follow this link or you will be banned from the site!
This website or its third-party tools use cookies, which are necessary to its functioning and required to achieve the purposes illustrated in the cookie policy. Find out more.