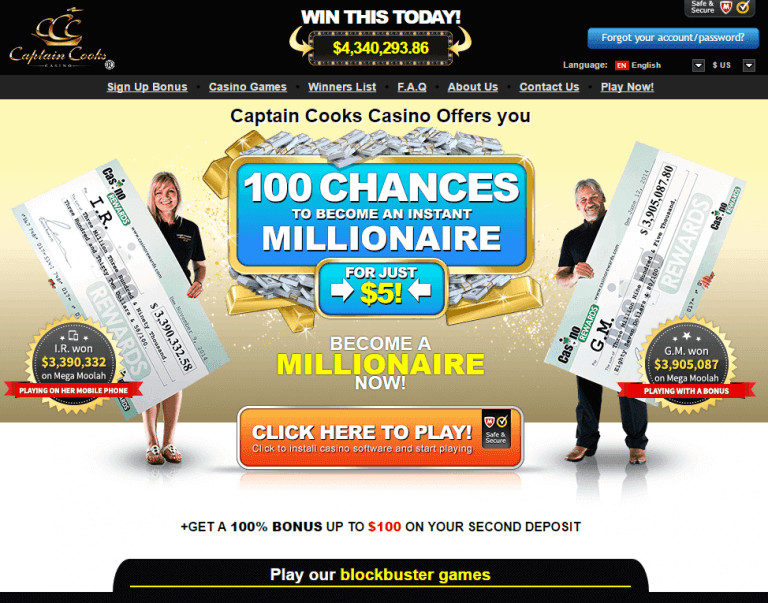 Captain Cooks Casino is a Microgaming Viper powered casino – which means that you can download the software (a rarity these days), or play the games in your browser. Microgaming games are very good – if you are a Video Poker fan, Microgaming has the best selection of video poker – up to 54 video poker games to choose from.

Captain Cooks is licensed by both the Kahnawake Gaming Commission and the Malta Gaming Authority. Players have an excellent chance that if they have a problem, it will be solved before it goes to any third party arbitration (unlike the UKGC that won’t deal with complaints – they are deferred to elsewhere). Besides this, Captain Cook’s casino rep is on of the best in the business. She has been with them for over a decade and is very responsive when it comes to complaints.

Unfortunately, Casino Rewards decided to implement some misguided and roguish promotion which aggressively enticed players to reverse their withdrawals for a measly 25% bonus. This violates our standards for Accredited Casinos:

Will not aggressively entice players to reverse cash withdrawals with bonuses or other incentives.

So they were removed from the Accredited Section to the Grey Zone.

Which is quite sad. Captain Cooks and I go way back. This was the first casino that I made an actual deposit at back in September 2000 – and won! Captain Cooks was originally owned by another company before being sold to Casino Rewards, and it had won some awards like Most Original Promotions 2001 2001? Really? Wow – gettin’ old.

A solidly run casino – in fact this was one of the first Microgaming casinos I joined in September 2000. They host the full range of Microgaming games which include the best selection of video poker games. (I’m a video poker player :)). They are well managed – Renee has been their public rep, and she is “on the ball”, smart, professional, and she has the experience to handle any player issues if or when they appear.

Captain Cooks Casino is licensed by Kahnawake which has probably the most effective player exclusion policy, and their player advocate has two decades worth of experience dealing with player complaints. So if you do have a prob – you will be taken care of, no doubt.

If it weren’t for the 48 hour payouts and $4000 per week limits,  and its predatory marketing tactics, it would be a bright shiny star.

Casino Rewards Casino reviews
Started by lockinlove, 3 years ago
17
9846
Last post by Bronx1983
12 months ago
Do NOT follow this link or you will be banned from the site!
This website or its third-party tools use cookies, which are necessary to its functioning and required to achieve the purposes illustrated in the cookie policy. Find out more.