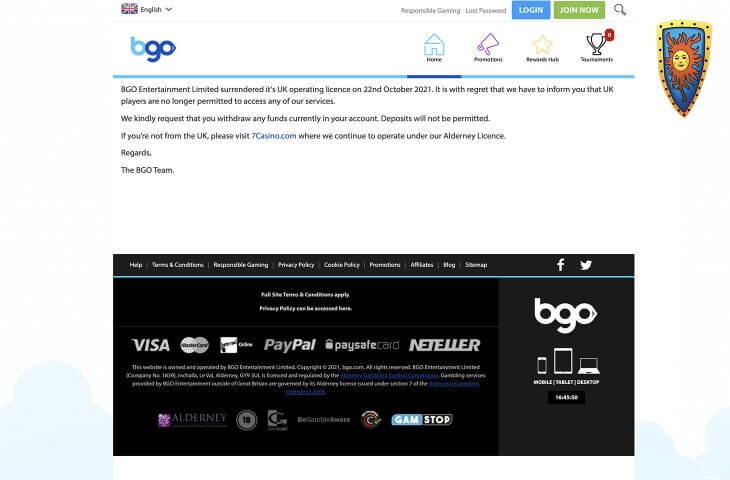 BGO Entertainment Limited who own and operate the online casinos BGO Casino, Power Spins, Vegas Luck and Chilli Casino, have announced all online operations will cease on 31st December 2021.

This news follows that of their UK Gambling Commission operator’s licence being surrendered back on 22nd October earlier this year.

At the time a notice placed on the UKGC site concerning the suspension of BGO’s licence, stated: “The review and consequent suspension follows concerns that activities may have been carried out contrary to the Act, not in accordance with conditions of their licence and that the Licensee may be unsuitable to carry on the licensed activities.”

“Failing to protect consumers was a key consideration in the suspension decision.”

This news has been followed by an email communication sent out this afternoon by BGO’s affiliate program, informing their affiliate partners of the decision to close down all operations, with all gameplay and deposit functionality across all brands being disabled as of now.

This is in addition to BGO voluntarily surrendering their Alderney licence at the end of 2021.

The email sent out to BGO Buddies affiliate partners, reads: “We recently wrote to you to advise you that BGO Entertainment had it’s licence suspended and to remove all brands from UK facing sites. Since this notification we surrendered the UK licence.”

“After a lot of consideration, we have now taken the difficult decision to also cease activity in non-UK markets and we will be surrendering our Alderney licence at the end of the year. Ahead of this, we have blocked deposits and gameplay across all brands.”

“With the above in mind, we are writing to notify you that BGO Buddies will close on 31st December.”

“In what can only be described as the worst possible timing, we have also had to migrate to a new bank account and because of this we are having some issues processing affiliate payments.Please rest assured that all commissions due will be paid in due course. We are hoping to have the issue resolved early next week.”

“You may or may not know that BGO was founded by entrepreneurs who started out as affiliates. The decision to close BGO and it’s affiliate programme wasn’t taken easily. We want to thank you for your hard work over the years and wish you the best of luck for the future.”