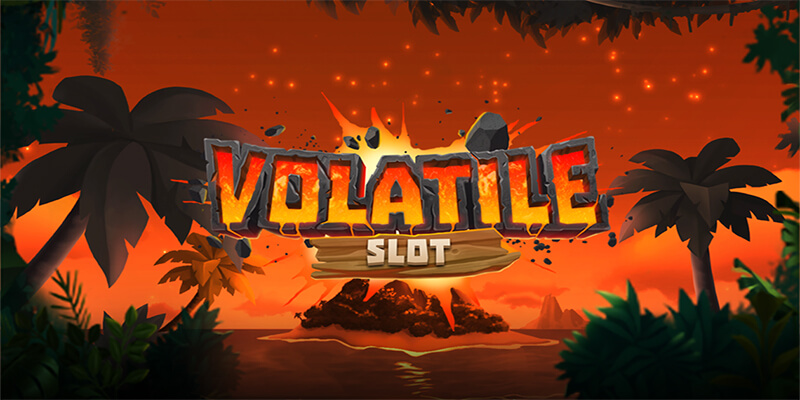 Volatility, what springs to the mind of a seasoned slot player when that word is mentioned? For me, it would be the same as you, describing whether a slot is likely to play for long streaks with lots of little wins, or long streaks with no wins, interspersed with hopefully a bankroll busting return.

Well Microgaming, thanks to their deal with the game developer Golden Rock Studios, with whom they have an exclusivity contract in place with, have released the aptly names Volatile Slot. But the name could be a little bit deceiving, as this slot features a volcanic theme, where the reels in play, are played against a backdrop of a volcanic island, featuring volcanic and exploding wild symbols.

Incidentally when talking about the “volatility” of the slot, it is actually highly volatile, so I guess the name of the slot machine is apt, although it is more named in relation to the theme of the slot, rather than the fact it is a high variance slot. Also for reference, the reported RTP of Volatile Slot is 96.1%

Released earlier in the week on Monday 11th November 2020, Microgaming will be hoping this five by three reel online slot game, that has a total of 10 paylines in play will be a hit with visitors to those online casinos that feature their game content.

James Curwin, the Chief Executive Officer of Golden Rock Studios, said of the launch of Volatile Slot: “We are proud to team up with Microgaming and look forward to providing them with many more exclusive games in the coming months.”

“Our first release, Volatile Slot, delivers an exhilarating, high-volatility gameplay experience and is filled with stimulating game mechanics and vibrant visuals. This slot is by its very nature, volatile, and if the volcano erupts, the level of extremity is taken to a whole new level for the player, with the maximum win at a 25,600 times stake!”

Whilst Microgaming’s Chief Executive Officer, Jean-Luc Ferriere, commenting on the slot machine and their deal with Golden Rock Studios, said: “With more than 15 new games in the pipeline, Golden Rock Studios are set to broaden our range with fresh and diverse content.”

“Volatile Slot is an impressive debut title and is now available across Microgaming’s entire customer base following a two-week period of exclusivity with LeoVegas.”