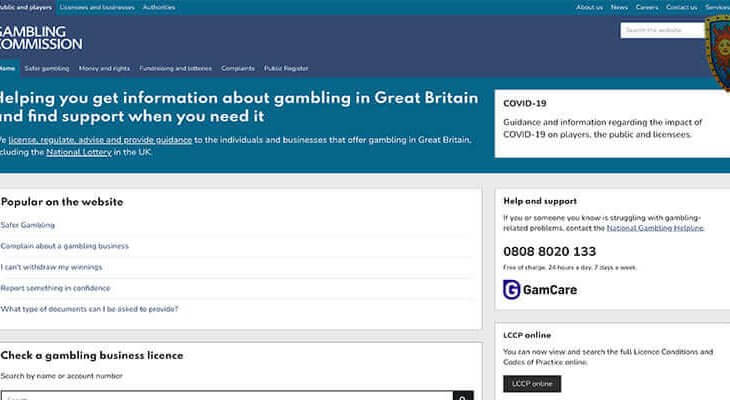 The UK Gambling Commission have  announced the launch of a new website to showcase the work they do regulating all gambling activities and businesses in the UK.

Taking to their Twitter account @GamRegGB , the UKGC announced the launch of their new site, read: “We are committed to ensuring gambling is as safe as it can be. In 2019-20, we conducted over 230 security audits and over 350 compliance assessments of land-based and online operators. Find out more about the work we do on our new website.”

The new UKGC site which can be viewed here, appears to still be at the Beta development stage, although from perusing it this morning the information which it contains and presents pretty much mirrors the current incumbent site that they are still utilising.

However, the layout of the new site has obviously been given a lot more thought for the end user and visitor, as information is a lot easier to find, with the new site being featuring a much more intuitive navigation menu. One new feature which is sure to be of an interest to all involved in gaming, is the ‘Day in the Life’ section. This provides an insight as to what a typical day is like for those that work for the UKGC.

Currently five UKGC employees are featured on this particular area of the site, with these being; Nick Oliver a member of the Sports Betting Intelligence Unit, Keith Bridges from Licensing, Abigail Down from Licensing, Rachel Wagstaff a Compliance Manager and Emma Boden a Digital Content Specialist.

Whilst the UKGC can and does come in for criticism from all quarters, including the player community here on the Casinomeister forum, the new site that they have unveiled, will I am sure go someway in providing greater transparency, with the information it contains far more easily accessible. So they should be applauded with the proposed overhaul of their current site design which is still in place.

Last week on the 9th December we reported here on Casinomeister that the Gambling Commission’s Chief Executive Officer Neil McArthur publicly came out and support the UK Government’s review of the 2005 Gambling Act. As part of the review the UK Government has initiated a ‘Call for Evidence’, whereby all stakeholders in the gambling industry in the UK, to also include players, can provide their feedback.

For further information on the ‘Call for Evidence’ please visit here, where details are provided as to how you can go about in providing your own views on the rules and regulations covering the gambling industry within the UK.

Certainly  if the proposed ideas of introducing bet stake limits on online casino games are of a concern to you, similar as to those imposed on the fixed odds betting terminals located at Bookmaker shops up and down the country, then you should let your voice be heard.

Whilst it is laudable and actions taken to crack down on gambling harm should be applauded. The UKGC and the UK Government need to be made well aware that punitive measures put in place under the guise of gambling harm protection, could and will drive a lot of players, who have a control on their gambling, to offshore operators.

Offshore operators who many operate in ‘flaccid’ licensing jurisdictions, whereby players will quickly find that they will not enjoy the same protections that currently the UKGC offers them, when they play at licensed UK sites.

Compliance specialists Rightlander announce the launch of their Smart Workbench