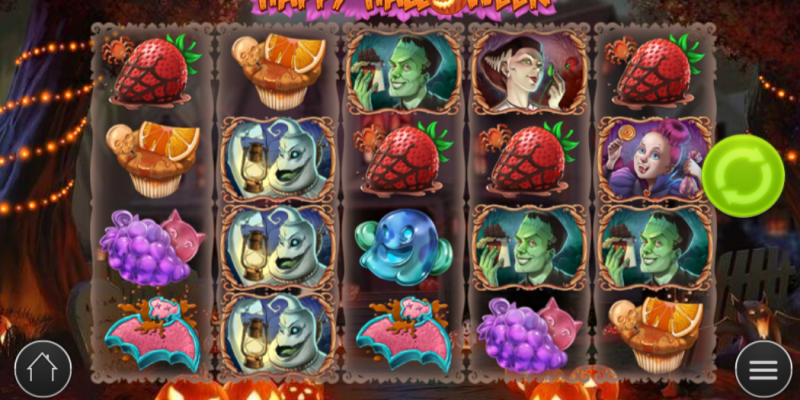 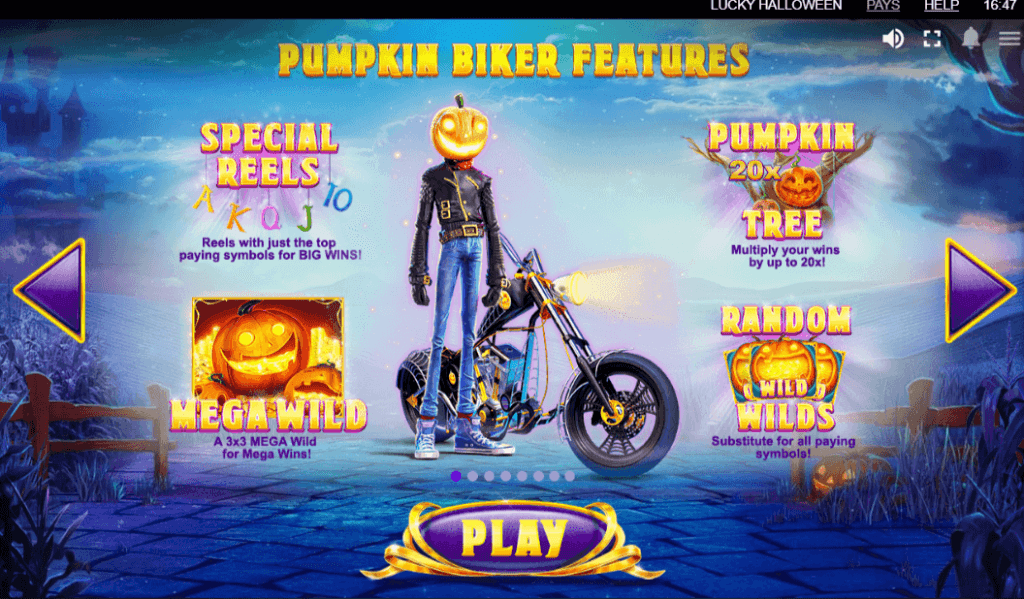 Lucky Halloween is a popular video slot from Red Tiger – and the game’s a popular choice with players who like regular (albeit often frustrating) teases and bonuses! Based around a 5-reel, 3-row format, Lucky Halloween offers up some great-looking graphics and sounds effects – something we’ve become used to seeing from Red Tiger.

During the base-game (and indeed the free-spins feature) a pumpkin-headed figure can pop out from the left-hand-side of the screen. When he does, he can award a few features including a multiplier wild trail, a giant 3X3 wild, and instant access to both of the main bonuses. The first bonus feature is the free-spins round, triggered by landing 3, 4, or 5 of the scatter symbols anywhere in view. The second is a castle bonus, which sees you climbing a trail. Reach the top, and you’ll walk away with 800X your stake! 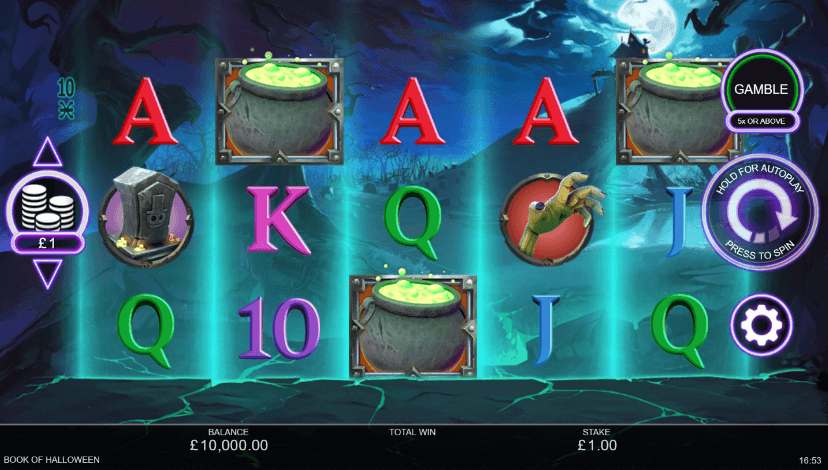 Book of Halloween is a new video slot from Inspired Gaming. The game’s built around a 5-reel, 3-row format, and there’s a total of 10 fixed paylines With an RTP of 96.21% it’s a desirable game to play, and punters can spin the reels from between 10p and £100. There’s also an average hit rate of 33%, which means you can expect to see a win – roughly – one in every three spins.
If you manage to land three or more scatter symbols anywhere in view, you’ll trigger the main free-spins bonus. Landing three awards you with 10 free-spins and a 2X cash prize, while landing four awards 10 free-spins and a 50X stake prize. If you’re lucky enough to land all five scatter symbols, you’ll win 10 free-spins with a 250X stake prize. Before the free-spins begin, a symbol is chosen at random to expand. This is essentially a Book of Dead-eseque slot, but it’s nice to see it used in a new genre! 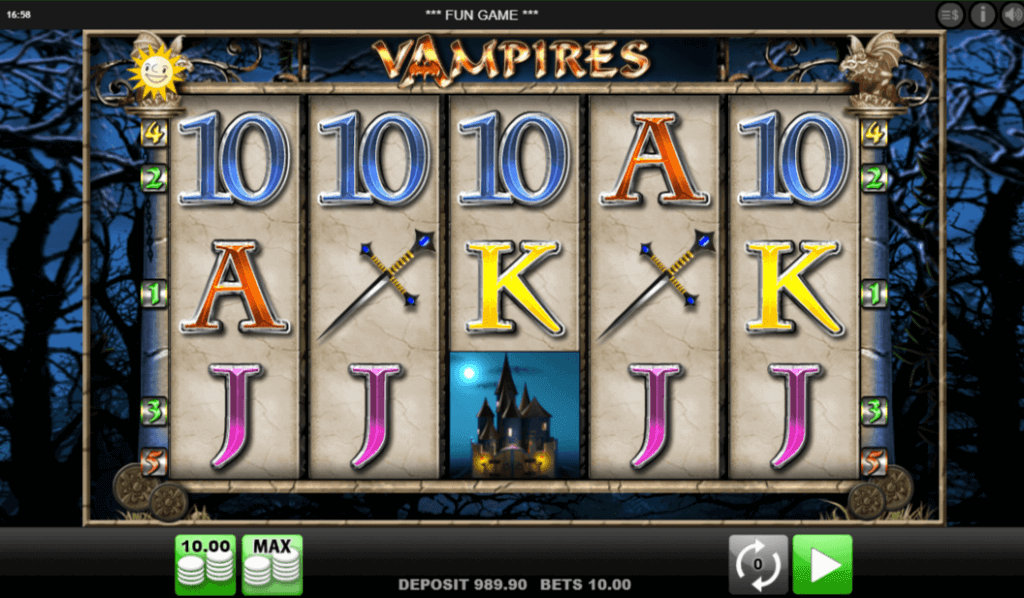 Merkur are well-known for their volatile slot machines, and Vampires is a great example of one of their best. Built around a 5-reel, 3-row format, Vampires offers just five paylines – and it’s the wild vampire symbols you’ll want to keep an eye on, as landing three or more of these (anywhere in view) will trigger the main free-spins bonus.

Once activated, you’ll receive 15 free-spins, and if, during the bonus, you manage to form a win using the wild symbols, the other non-wild symbols involved with the win will be transformed into wilds. These new wilds stay for the duration of the bonus, meaning the more wins you get – and the further into the bonus you are – the more chances you have of hitting a wild line! A wild line (along with a 5-of-a-kind combo of the top-paying symbol) pays an impressive 1,000X stake! 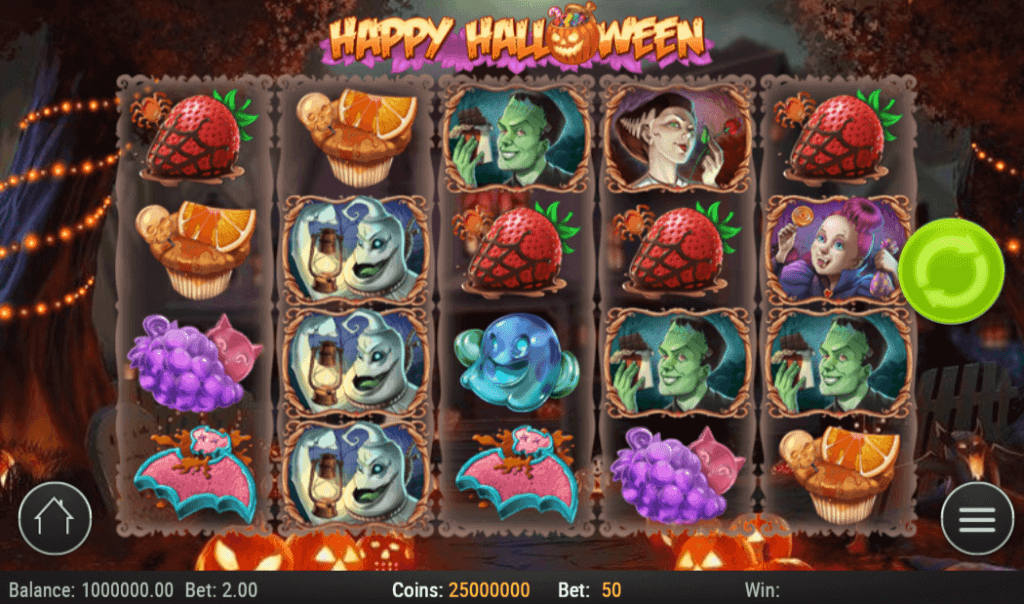 Happy Halloween is a slot from Play’n Go – one of the world’s largest game developers – and it’s built around a 5-reel, 4-row format with 50 paylines. The game follows the Grave family, and it packs a couple of decent features including stacked symbols during the base-game.

If you manage to land three of the scatter symbols on reels one, two and three, you’ll trigger the main free-spins bonus. This awards you with 10 free-spins. During the bonus, the wild symbol is stacked on reels 2 through 5, and on each free spin, two additional wilds are added to each of these reels. If you manage to re-trigger the feature, a ton of wilds can land in view – and this is where the game’s main win-potential can be found. 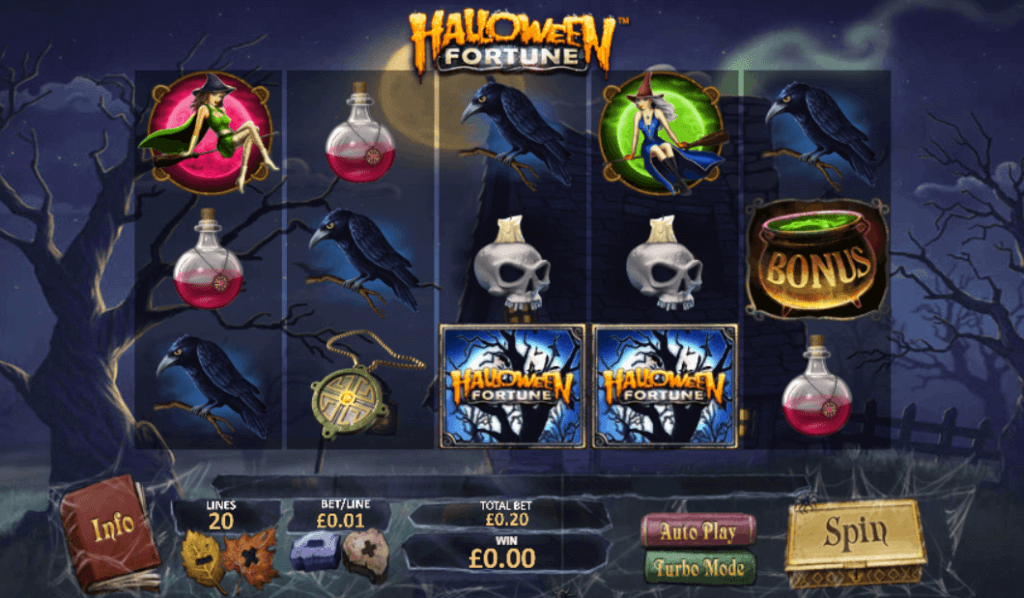 Halloween Fortune is one of Playtech’s most popular games, and it’s build around a 5-reel, 3-row structure. There’s a total of 20 paylines, and as you can probably tell from the name (and indeed the theme of this post) the game’s themed around… Halloween! The game can be played from between 20p and £100 per spin, and there’s some decent win-potential here. For example, landing a 5-of-a-kind combo of the Jack-O-Lantern symbol will award you a 10,000-coin jackpot!

There’s a Witches’ Brew Bonus which is triggered by landing the Cauldron scatter symbols on reels one and five. You will then get to pick one of three witches – and this will give you anywhere from three to 20 free-spins. Now, before the free-spins begin, you’ll also get to choose from one of six potion vials. This will award a multiplier, which can range from 2X to 20X. This multiplier is applied to all wins during the free-spins bonus. 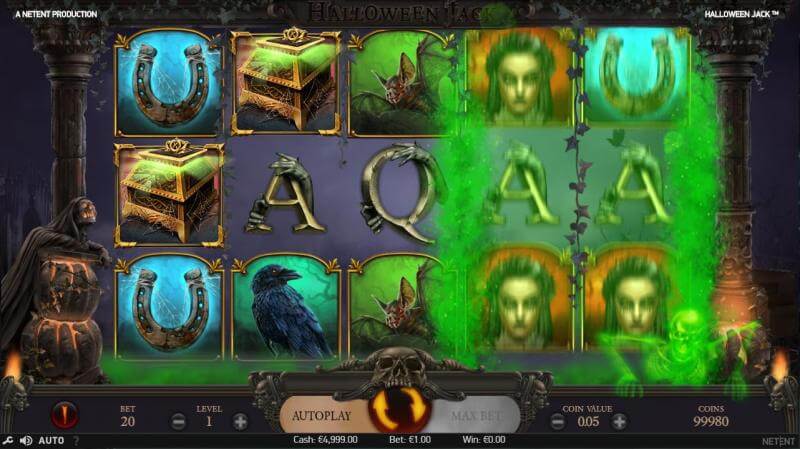 During the base-game, the walking wilds feature is active, and any time you land a wild symbol in view, this wild will ‘walk’ across the reels. These are free re-spins. If you can land three or more scatter symbols anywhere in view, you’ll trigger the main free-spins bonus – giving you 10 initial free-spins. During the bonus, you’ll be trying to land a lantern on reel five. Each time you collect three lanterns you get a wild upgrade – and if you can make it to the end stage, landing a wild in view will see it expanding to fill the entire reel! 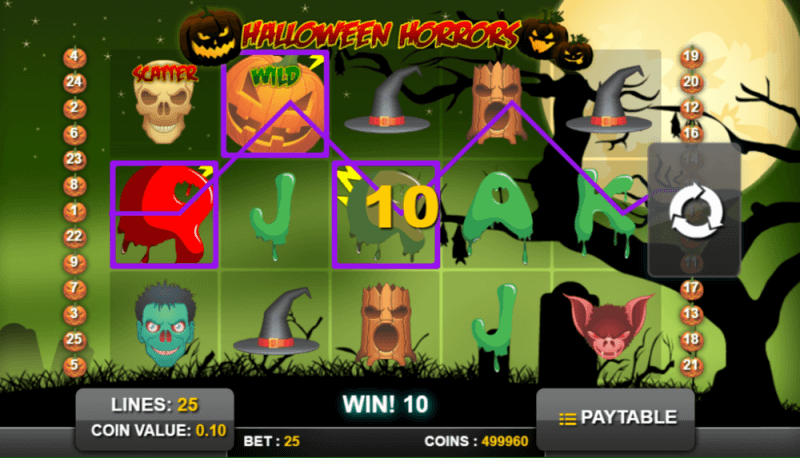 Halloween Horror is an old-school slot from 1X2 Gaming. It’s built around a 5-reel, 3-row format, and there’s 25 paylines in play. The game’s symbols include playing card values, including 10, jack, queen, king, and ace (as the low-value ones) and game specific symbols including a tree, a noseless zombie, a black cat, a bat and a witch’s hat.

If you can land 3, 4, or 5 of the scatter symbols anywhere in view you’ll trigger the main free-spins bonus. This will award you either 5, 10 or 15 free-spins. During the bonus, all wins are multiplied by 2X – and you will also see some new headstone symbols present. Landing three, four or five of these headstones awards a cash prize of 30, 100 and 200 coins respectively. 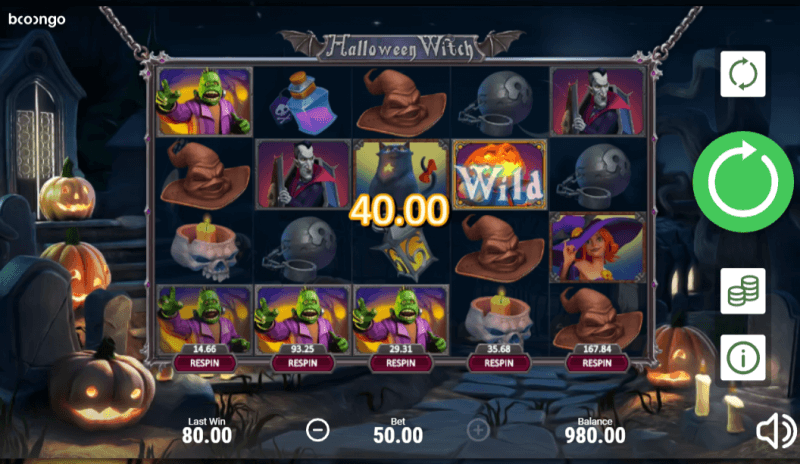 The Witch is a video slot produced by Boongo (for one of their game partners), and the game is designed to allow you to enter a unique realm – with a pretty strange theme! The game is built around a 5-reel, 3-row format, and there’s a total of 30 paylines in play here. There’s quite a lot going on in the game, including Chain Re-spins, symbol transformations (turning low-value symbols into wilds) and, naturally, a free-spins bonus. 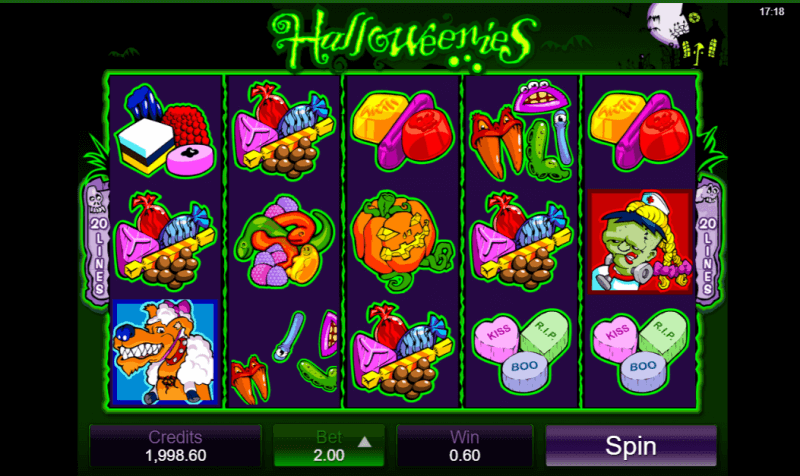 Halloweenies is one of Microgaming’s really old-school games. It’s fair to say that it looks quite different to most of the games you’ll see today – but this retro kind of ashetic is something that some players like, so we figured it was worth a mention here!

Halloweenies is built around a 5-reel, 3-row format, and there’s a total of 20 paylines active here. You’ll see a selection of symbols on the reels, with the lower-paying ones including a selection of sweets, including wine gums and liquorice all sorts. The higher-paying symbols are a bit more theme-specific, and include a witch, a wolf, a zombie and Frankenstein’s monsters.

There’s two bonuses in Halloweenies, the first of which is a classic “pick me bonus”. This is triggered by landing three or more of the pumpkin scatter symbols anywhere in view. You will then get to pick one of the pumpkins on the reels, and doing so will award you with a cash prize.

The second bonus is a free-spins round, and this is triggered by landing three or more of the pink rabbit scatter symbols anywhere in view. During the free-spins bonus, all wins are multiplied by 3X, and it’s also possible to re-trigger more spins. This is done by landing yet another 3, 4, or 5 of the scatter symbols anywhere in view. Plus, you can also trigger the Pick a Pumpkin bonus from the free-spins round too. 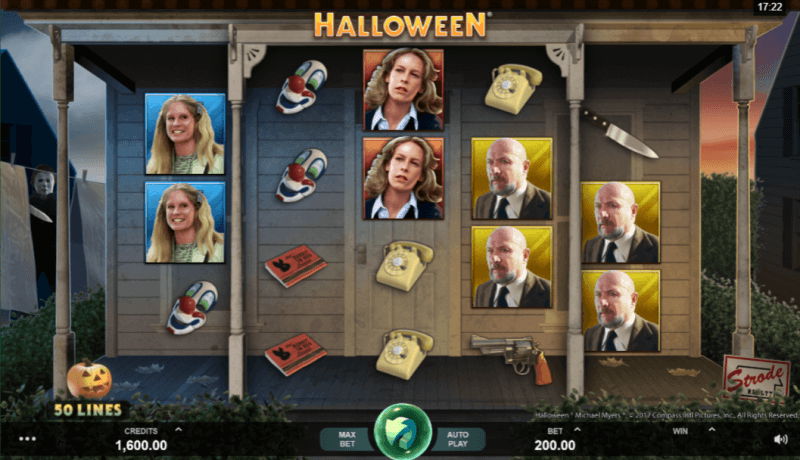 Halloween is a video slot from Triple Edge Studios (one of Microgaming’s in-house game studios), and the game is set around a 5-reel, 3-row format. It’s a super-interesting game format, as, on each spin, three reels group together – moving randomly across the reels. There’s also up to 150 paylines active on each spin, thanks to the wandering reels.

There’s a few bonuses to look out for, and the first is the Free Spins round. This is triggered by landing three of the scatter symbols in view, and then landing a character symbol on the Trick or Treat Wheel. All free-spins bonuses award you 9 free-spins, and during that bonus, the character who triggered it will be seen more frequently on the reels.

It’s a unique game, but if you’re looking to try something a bit different, it can be worth checking out. Hitting big wins, however, is something you won’t be seeing too often.

As you can see, there’s a ton of Halloween-inspired slot games for you to choose from. Truth be told, most game developers have at least one Halloween-themed slot in their portfolio, and if you fancy playing one, make sure to check out the list of games above!
Have a personal favourite game you think should be listed here? Let us know in the Forum- we’re intrigued to find out what your favourite Halloween-themed video slot is!

About the Author... Total Posts Written: 73

Greentube to launch games in Italy with 888

Megaways™ is in the Dog House!