The Hand of Midas Video Slot 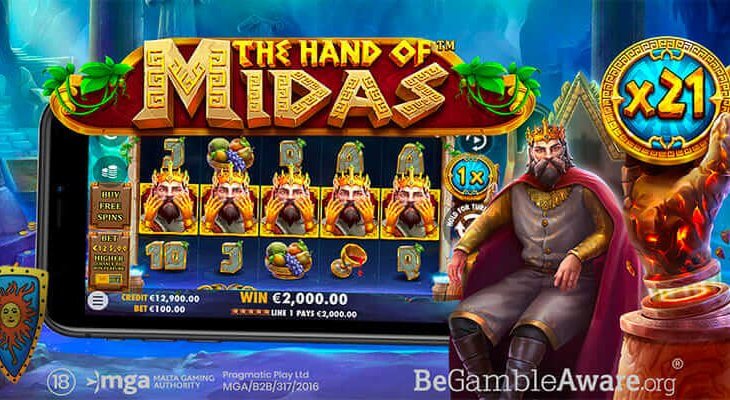 The Hand of Midas a 5 row by 3 reel  video slot produced and developed by the Malta based casino game studio Pragmatic Play, with The Hand of Midas offering players an RTP of 96.54% in what is in essence a high variance slot game.

Based on arguably the most famous of Kings in Greek mythology King Midas, who was able to turn anything he touched into gold ( Hence the term ‘Midas Touch’ ), no doubt players who play this newly released slot at casinos to include the award winning All British Casino, will be hoping for some luck of the same.

The 5×3, highly volatile slot is played out in the shadow of a mysterious ancient temple, featuring colossal gold-etched pillars and a mesmeric soundtrack that will captivate a wide variety of casino players.

The Free Spins mode is triggered if three or more Scatters land on the reels, awarding a random number of free spins. During the Bonus Mode, Wilds are sticky leading to huge wins, while players can also receive extra consolation spins, benefitting from Midas’ generosity.

Commenting on their latest release which went live across operators that carry game content from Pragmatic Play at the end of last week, Pragmatic Play’s Chief Business Development Officer Yossi Barzely said of The Hand of Midas: “The Hand of Midas takes players to the land of the greedy Greek character as they look to help relieve him of his wealth on the reels.”

“Our exclusive portfolio of slot games continues to grow every month, and new titles such as The Hand of Midas allow us to reach even more players and create more engaging content for them.”