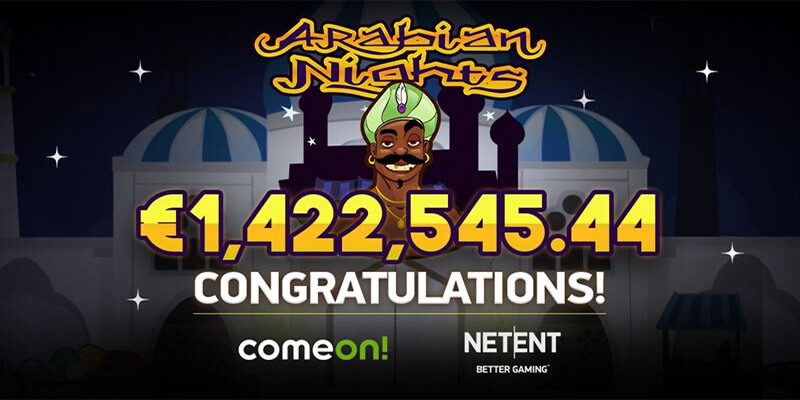 A lucky player from Sweden is €1.4m better off after playing the NetEnt slot game Arabian Nights at Swedish facing Hajper Casino, after hitting the life changing win whilst playing the slot at €10 a spin.

Casino game developer NetEnt have announced that earlier this month, the lucky player hit the seven figure win at Hajper online casino, which is owned and operated by the ComeOn group and landed the legendary five Aladdin wilds symbols, after hitting the free spins feature bonus game. Thus producing the bank busting win of €1.4m.

One of the first progressive jackpot slot games developed and released by NetEnt, Arabian Nights was released back in 2005 and during its 14 years online has created several millionaires.

Director of Games at NetEnt, Bryan Upton, said of the latest jackpot win: “Arabian Nights is such a legendary game in the jackpot segment. It has created instant millionaires continuously since it’s release back in 2005. We are thrilled the game yet again has delivered a life-changing win and would like to extend our congratulations to the player.”

Currently Arabian Nights is one of several progressive jackpot games developed by NetEnt that is available to players at those online casinos which feature their game content. Other popular jackpot slots produced by NetEnt include Mega Fortune, Mega Fortune Dreams and Hall of Gods.

With titles such as Grand Spinn Superpot, Mercy of the Gods and Imperial Riches being added to their portfolio during the past year.