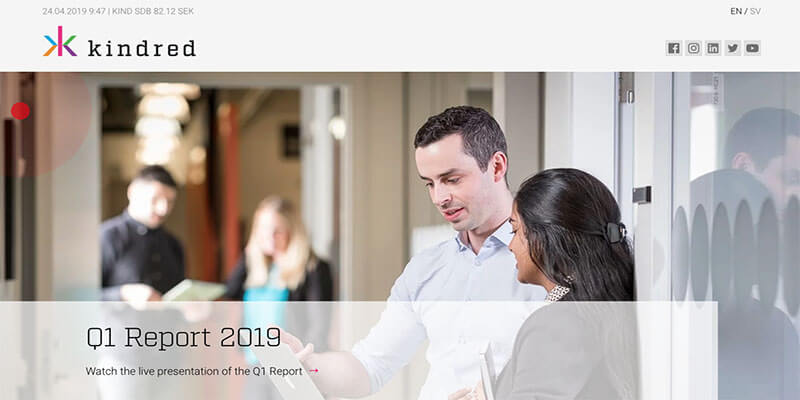 Kindred Group, the owners of iGaming brands such as Unibet and 32Red have posted positive results for the first quarter of 2019, with the Swedish iGaming company generating gross winning revenue of £224M, an increase of 8% at this stage last year.

Commenting on the results for Q1 2019, Henrik Tjärnström, CEO of Kindred Group said: “During the quarter we have had strong levels of activity across all markets and all-time highs in active customers and Sports betting turnover. This is the result of our continued investment in marketing, where focus has been in relation to responsible gambling in Sweden and football sponsorships in the UK.”

Tjärnström also recognised the new regulatory pressures in the Swedish market had effected the company’s growth there, stating: “As anticipated for several years, the re-regulation of the Swedish market resulted in significant short term margin pressure, particularly in the first quarter.”

With Tjärnström also commented and highlighted  the betting duties the company were exposed to in Sweden and said of this: “Other significant items affecting the quarter was the Swedish betting duties paid of GBP 5.2 million but also marketing investments increasing with GBP 3.8 million. This has significantly influenced the Gross winnings revenue in the quarter but also EBITDA. The total effect on Group EBITDA from the Swedish market opening in the first quarter was a reduction of GBP 18.9 million compared to the first quarter last year. Whilst these are significant numbers, we always expected the opening of the market to result in an initial margin pressure but we are confident that we have a solid base to build from and are expecting continuous improvements from here.”

For those of you who may be interested, you can check out the full Q1 report here.