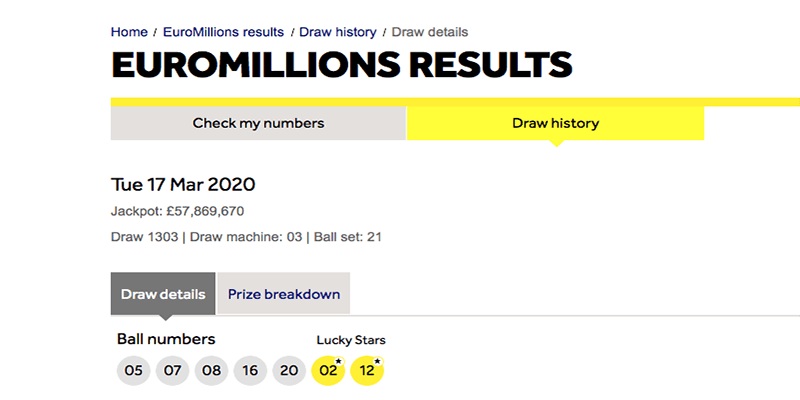 The Euromillions jackpot for the draw that took place on Tuesday 17th March amounting to just shy of £58m has been claimed by a ticket holder who lives in South Ayrshire Scotland. Last month lottery organisers Camelot, appealed for the ticket holder to come forward after the prize went unclaimed.

However, earlier this morning Camelot have confirmed that an individual from South Ayrshire has come forward with the winning ticket, claiming the £57.8m jackpot prize. The ticket holder matched all five main numbers, plus the two lucky stars in the draw. The winning numbers drawn were 05, 07, 08, 16 and 20, with the Lucky Stars 02 and 12.

Once the ticket has been validated by Camelot and the jackpot monies of £57,869,670 have been paid out, it will then be up to the ticket holder as to whether he or she goes public with the win or not.

Camelot’s Senior Winners’ Adviser, Andy Carter, speaking of the winning ticket holder, said: “It is fantastic news that a lucky ticket-holder has now claimed this enormous prize. We will now focus on supporting the ticket-holder through the process.”

“During the current crisis, we’d like to encourage as many players as possible to check their tickets and play online or on the National Lottery app, and to only buy their tickets in retail or claim a retail prize if they are already in-store to do an essential shop.”