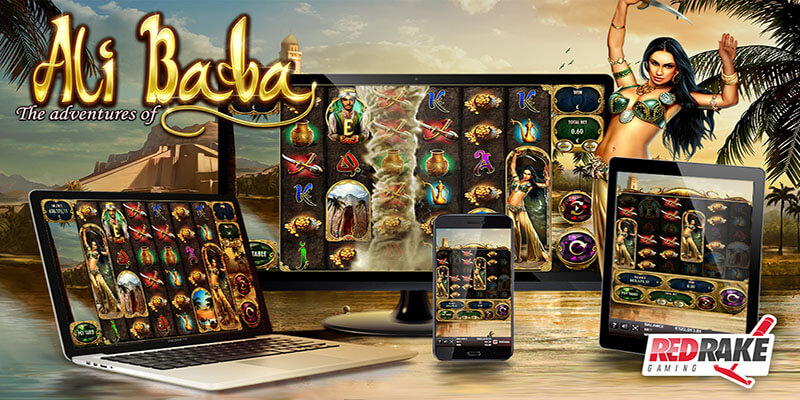 Red Rake Gaming last week announced the release of a new slot game. The Adventures of Ali Baba is a 6×6 reel video slot with an infinite free spins feature which also has a high payout potential.

The innovative provider of casino games takes players deep into the magical world of Ali Baba and invites them to capture the 40 thieves’ treasure as well as other diverse features filled with excitement.

During the normal feature, players shall have lots of help to achieve a win. On the one hand, a powerful tornado will appear randomly at the end of a spin and will copy a reel straight to the left-hand side in order to give the player a better chance of a win. On the other hand, Morgiana, Ali Baba’s inseparable partner on his journey, can appear as a wild symbol 1×4 to give more wins.

In order to be able to shout the famous “Open Sesame!” to open the cave and enter into the infinite free spins feature, players will have to get three SESAME symbols on any reel which will remain fixed and then launch respins until 6 SESAME symbols come up which are necessary to benefit from these spins.

Once inside the free spins feature, players will have the chance to increase the value of the wins with the appearance and fusion of gold symbols, which remain fixed whilst repeating the win obtained for every spin. This feature will finish with the appearance of the thieves on the reels which, in turn, will award 1 final grace spin.

But that’s not the end, during the feature, the gold symbols 1×1 can fuse into treasure symbols of 2×2 and 3×3 to multiply the win for the player.

This new video slot went live on Thursday 27th June and is available to play at all those online casinos which carry games from Red Rake Gaming.