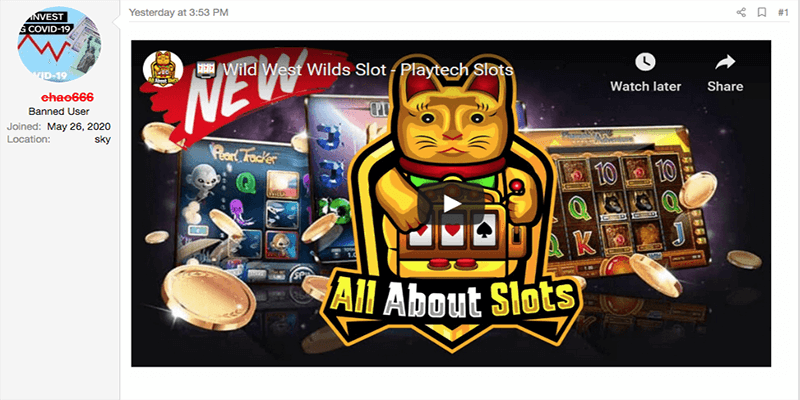 One thing that members of the forums here at Casinomeister are good and adept at doing is sniffing out a shill for a casino, affiliate site or software provider.

Yesterday afternoon, the new forum poster chao666 got such a welcome from the forum membership, having made his initial post extolling the virtues of a particular Playtech game. Thus embedding within his post a youtube video of said game, which was uploaded by a certain affiliate site and emblazoned with their specific branding.

chao666: I found a very additive game from playtech.
I cant stop playing it, it is simple but ez to get lots.
fucking crazy free spin round so i want to recommend it to all of my buddies here.

It became apparent from chao666’s initial post that all was not as it seemed, with experienced Casinomeister forum member Harry_BKK calling him out instantly, stating: “Shilling for an affiliate site is not cool. Especially not when it is your first post.

This did not stop chao666’s in his tracks though who protested his innocence by saying: “Why did you say that. i just made the suggestion, nothing else. I know I am a newbie but so what, haha.”

At this stage, one of the moderators on the forum (Dunover) stepped in, stating: “Nope – you’re promoting your new YouTube channel with affiliate links underneath it. Fine when you have webmaster privileges but you don’t – these are earned over time or given with permission of the owner. If you want to tell us about this game, a simple screenshot and explanation would do, in a ‘new slot announcement’ thread.”

Casinomeister was alerted of the post, put down his beer, and stepped in. He posted a screenshot of “chao666’s” registered domain – it was playtech.com (gasp!). This person was posting in the forum from one of Playtech’s servers.

At this point, Casinomeister demanded an explanation from the poster – but instead of answering, the person posting from Playtech’s servers tried to delete all of his posts. Unfortunately for chao666, his “deleted” posts were restored to their former verbose glory.

At press time, Casinomeister stated: “As soon as he called the forum members ‘my buddies’ on his first post, I knew something was afoot. That, and the fact that he signed up in the forum from a Playtech server using a Hotmail email address, was a dead giveaway. Oh, what a tangled web we weave when first we practice to deceive.”

Using shills to pump up the player communities is not only a deceptive marketing practice, it’s unethical. I am sure the ASA or UKGC would frown upon this. Playtech can take the walk of shame – the thread will remain. To see the painful sequence of events unfold before your eyes, you can check out the thread: I’m a shill, got caught, I’m outta here! (obviously changed from the original title “Wild West Wilds”).

About the Author... Total Posts Written: 675