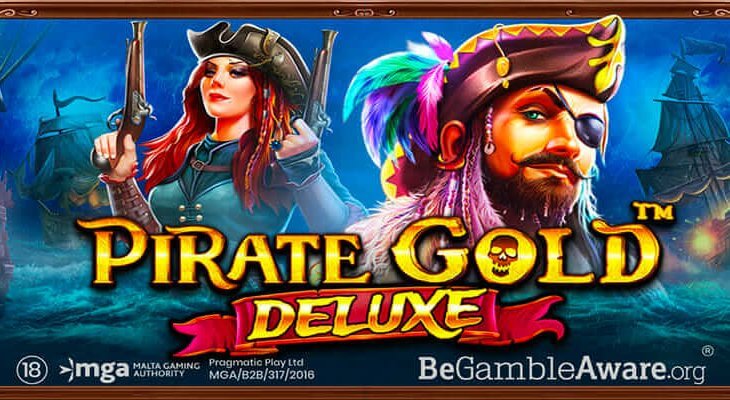 Pragmatic Play have continued their trailblazing schedule of releasing new, this time with the pirate themed slot game Pirate Gold Deluxe, which is available as from 12th November 2020. A 4 reel by 5 row video slot with 40 paylines. Pirate Gold Deluxe sees the return of Pragmatic Play’s fearsome crew of pirates, in this innovative hold and win casino slot.

First things first and Pirate Gold Deluxe on the surface at least is great on the eye, employing superb graphics, animation and effects. I would personally class Pirate Gold Deluxe as a high variance slot and the reported RTP of the slot is a decent 96.48%, with the game also offering a  potential maximum win of 15,000 times your bet stake.

The sequel to the original Pirate Gold from Pragmatic Play, the deluxe treatment afforded to the slot certainly makes it brighter in appearance. The only feature round that can be hit when playing is the Lucky Treasure Bag, with this feature awarded as and when 8 or more money symbols appear on the reels.

Commenting on the release of Pirate Gold Deluxe, Pragmatic Play’s Vice President Lena Yasir stated: “Pirate Gold Deluxe invites players back onto the high seas to join our hearty crew as they hunt for treasure. With a fun-filled hold and win style Bonus Round, any spin could turn into a lucrative win.”

“We continue to add new and innovative games to our portfolio, as well as refining current classics. Our approach to game development continues to bear fruit and we’re eager to see how Pirate Gold Deluxe is received by our fans.”