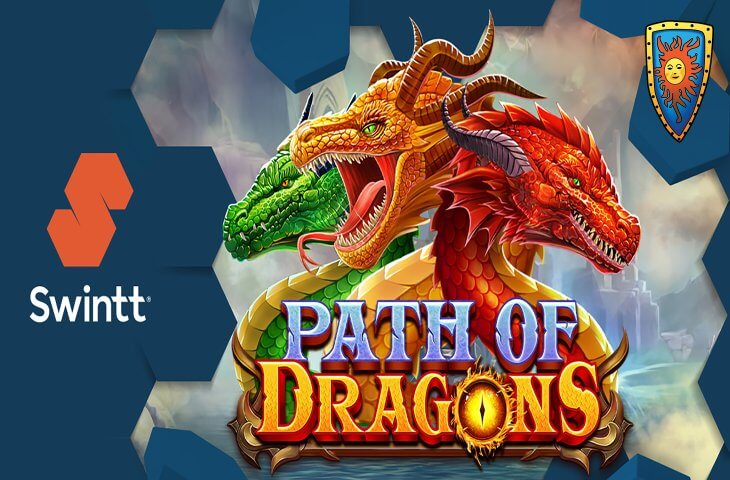 The latest slot game to come off the production line of the casino game studio Swintt, is the fiery Path of Dragons which was released to all operators which can carry their games at the end of last week. Players can see for themselves what the game is all about at several of the  casinos listed here on Casinomeister, including JooCasino, the accredited casinos Slotwolf Casino and Oshi Casino.

A five-reel, 20-payline slot, Path of Dragons sees players ascend to the peaks of a mystical mountain where three of these magical fire-breathing beasts reside. There, they’ll be greeted by a suitably epic soundtrack as they spin their way to maximum wins of up to 3,000x their stake using a completely unique line-up of symbols that includes coloured gems, crossed swords and piercing green lizard eyes.

In addition to these ornately decorated base game icons, players will need to keep an eye out for the red, green and golden dragons that appear on reels two, three and four respectively. Whenever one of these special scatters appears, a dragon of the same colour will swoop its way across the reels from left to right, leaving behind a trail of fire that transforms everything in its path into matching symbols.

Should two dragons descend on the reels simultaneously, any point where their paths intersect will be transformed into a substitute wild, while if all three pass over each other together, the aforementioned wild will be upgraded with a 2x multiplier. Not only that, but landing three dragon scatter symbols at once will also trigger the game’s main feature, where even greater rewards await.

Whenever this happens, players will be awarded an initial eight Free Spins as the skies are set ablaze and the misty mountain backdrop transforms into a sea of fiery red. Now whenever a dragon scatter symbol lands, all symbols in its path will instantly be upgraded to substitute wilds – while any two dragons that cross each other’s trails will apply a 2x prize multiplier to the wilds that they leave behind.

Should players be fortunate enough to again land all three dragons during the Free Spins feature, not only will they receive an additional eight games, but the trio can also combine to create an even bigger 5x prize multiplier on any wilds that invariably leads to huge payouts whenever it appears on the reels.

All of this combines to make Path of Dragons a medium-high volatility slot with an RTP of 96.07%, meaning that should the terrifying trio favour players with their fiery blessing, there’s potentially an inferno of prizes to be won – especially if they use the Buy Feature button to access Free Spins early.

“Featuring a unique bonus mechanic that can transform symbols, create wilds and apply additional prize multipliers, there are numerous ways for players to blaze their way to maximum wins of 3,000x their bet and we’re sure the game will prove a scorching success for all of our online casino partners.”