New Games from Microgaming for January 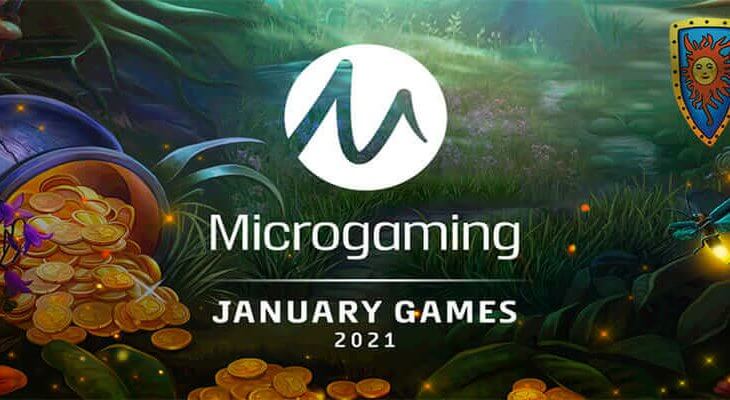 Isle of Man based casino game studio Microgaming have announced their schedule of new game releases to ring in the start of 2021, with Shamrock Holmes Megaways™ having already gone live back on the 5th January 2021. Developed exclusively for Microgaming by All41 Studios, Shamrock Holmes Megaways™ is a high variance online slot that plays over six reels and features the world’s most famous leprechaun detective.

Sherlock Holmes Megaways™ being the first of two All41 Studios slot game releases developed exclusively for Microgaming in the month of January, the other slot being Forgotten Island Megaways™ which is scheduled for release at the end of the month on the 26th January.

Forgotten Island Megaways™ is Microgaming’s new take on the legendary ‘King of the Apes’, featuring a giant prehistoric gorilla. The slot is packed full of features, to include extra reels, Rolling Reels™ and ‘Kong Spin’. When the Kong Spin feature is triggered, a special multiplier is added and each Rolling Reels™ increments the multiplier by one, with the maximum win multiplier being unlimited.

Last week Microgaming also unveiled a wild west themed slot game in the form of The Bounty by Snowborn Games, again exclusively developed for Microgaming. For those of you that want to try out The Bounty, you can do so at the multiple award winning 32Red casino here. Before you do so, you can also check out our 32Red review to find out what benefits players get from playing there.

Today on the 12th January sees the release of Foxpot across all casino operators that carry game content from Microgaming. Produced and developed by the independent game studio Foxium, Foxpot contains just three reels and one active payline.

With a reported RTP of 96.31%, Foxpot no doubt will appeal to those fans of old style fruit machines and also incorporates a nudge feature for good measure too!

On Thursday 14th January, the casino game developer Northern Lights Gaming see their debut release with Microgaming, with the launch of Golden Stallion™ Ultraways™. Galloping horses in the ‘Old West’ is the theme of this highly volatile video slot. There are lots of free spins for players to aim for and the hitting of three scatters in free spins mode will trigger the Ultraways™ mechanic.

The Ultraways™ mechanic  has the reel positions  split to offer double and quad symbols, which can reach a staggering 196,608 Ultraways™.

Next up on the 19th January is the latest game developed by Gameburger Studios and their 5 reel by 3 row, 20 payline slot titled Hyper Strike™. As the promotional material for Hyper Strike™ alludes to, this slot game is rendered in glorious technicolor with a pumping disco-funk-pop soundtrack.

The following day on the 20th January it is the turn of Neko Games to unveil their video bingo game Pachinko across the Microgaming network of operators. The game is inspired by the  colourful and wonderful pachinko parlors of Japan. What are Pachinko Parlors exactly? Good question, well according to Wikipedia, a Pachinko is “a type of mechanical game originating in Japan and is used as both a form of recreational arcade game and much more frequently as a gambling device, filling a Japanese gambling niche comparable to that of the slot machine in Western gambling.”

Other games set to go live this month across the Microgaming gaming platform include Lightning Box Games Bondi Break and Animals of Africa from Gold Coin Studios.

As always please provide feedback on all the above slot games in our forum.