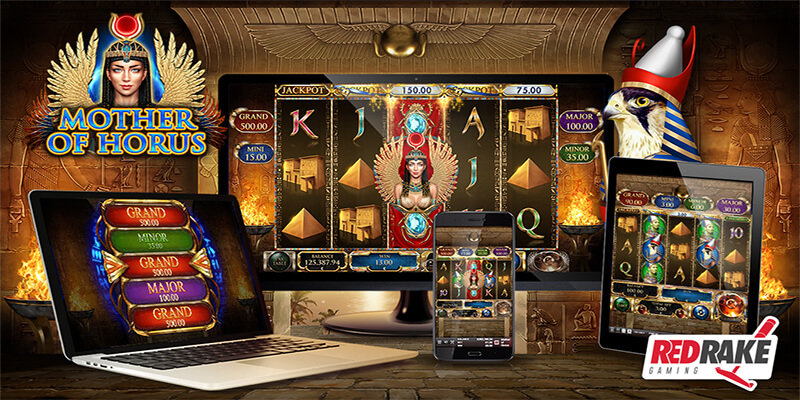 A new slot has been released by the folks from Red Rake Gaming in time before the years end, with Mother of Horus now available at those online casinos that feature casino game content from Red Rake.

Introducing the Goddess Isis, the Mother of Horus, this slot game is billed as an incredible video slot with an upper prize bar. A 5 reel, 3 row slot machine, Mother of Horus is yet another slot with an Egyptian theme setting. Think Egypt, think Cleopatra and all the various cleo spin offs for instance. Based on Egyptian theology, Isis is the wife of Osiris and together they had a son called Horus, of which this slot game is about.

According to the press release material sent out by Red Rake Gaming, the best feature of “Mother of Horus” is the upper prize bar. During both regular features and free spin features, the Isis symbol will appear and award players with wins that arrive in the upper bar of the reel where she has appeared.

These may be direct wins, free spins or jackpots. During the regular feature the Isis symbol may appear in reels 1, 3 or 5, but during the free spin feature she may appear in any reel. It should be highlighted that players can win various prizes in one single spin.

The Jackpots feature is introduced with a spectacular “Destiny Roulette”, which offers three types of wins: Minor Jackpot, Major Jackpot and Grand Jackpot. All of them will increase the player’s balance straight away. You may be granted access to more than one roulette game, and if this happens they will be accumulated and played consecutively.

Mother of Horus was released yesterday on 19th December 2019.