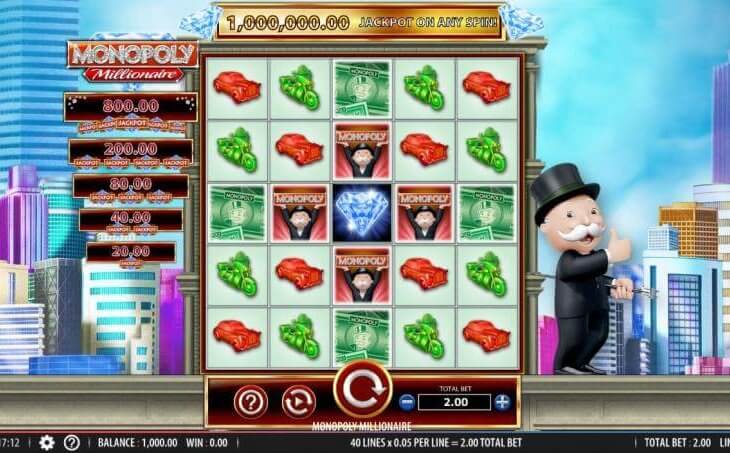 Over the past decade or so, there’s one theme which we see cropping up time and time again in the online gambling world; Monopoly. Particularly popular with players from the UK, Monopoly slots are fun to play, exciting, and many can offer some fantastic win-potential. While most of the Monopoly slots currently available are developed under the Scientific Games brand, there are a couple of other companies that develop them too.
The purpose of this post is to take a look at the Monopoly games which are currently available. We’ll show you a brief introduction to what’s what – and we’ll show you the bonus features present in the games. At the end of this page we’ll also look at a couple of non-slot Monopoly games. So, without further ado, let’s get started! 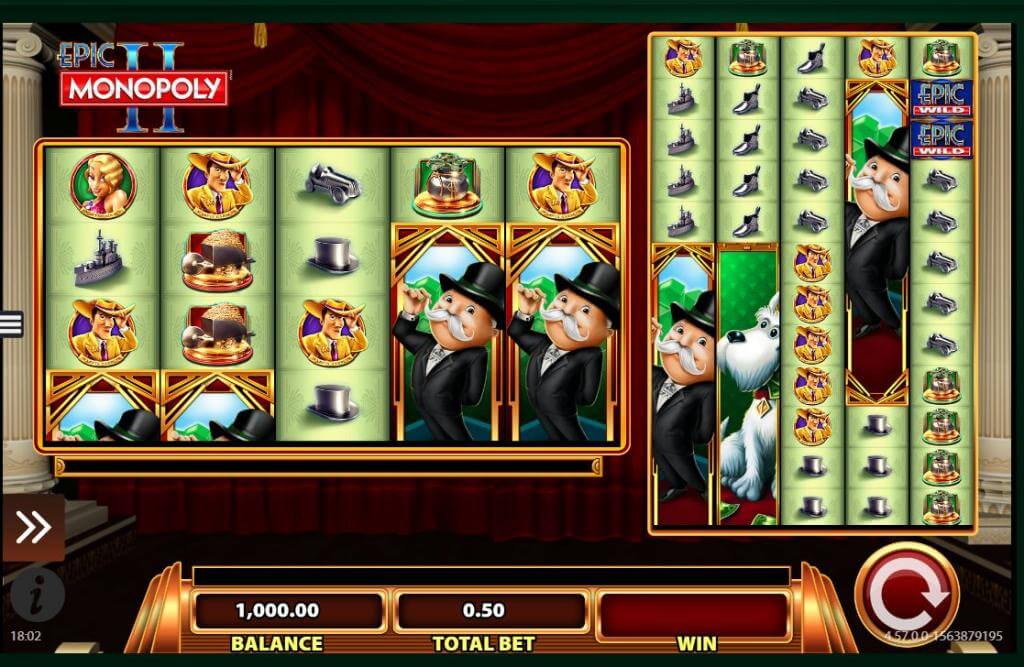 WMS are a name you’ll see a lot on this page – and they’re the developer behind Epic Monopoly II – one of the provider’s most successful and popular Monopoly games. Epic Monopoly II is a vibrant, youthful-looking video slot that’s based around a classic 5-reel, 3-row format. Where things begin to get a bit unconventional is the payline structure – and there’s a total of 100 paylines active on each spin.
You’ll find the likes of popular Monopoly characters including the likes of Mr Monopoly, his white dog, along with the ship, cauldron, wheelbarrow and car symbols. The main attraction to playing Epic Monopoly II is the Epic Wheel Bonus, and this is triggered by landing three or more of the bonus symbols anywhere in view. You’ll then enter a Wheel of Fortune-like bonus, with big prizes available to lucky players!

Monopoly Mega Movers is another video slot from WMS, and it uses the same game format we saw in their Zeus: God of Thunder slot. Playable from as little as 50 coins per spin, Monopoly Mega Movers has three exciting wheel bonuses, and there’s also five different progressive jackpot available to be won.
On any spin during the base-game, the symbols can be highlighted randomly. When this happens, you may land a 3-of-a-kind, 4-of-a-kind or 5-of-a-kind combo of these special lit symbols. If you do, you’ll trigger the respective wheel bonus, and you’ll then see a giant wheel spin. This wheel can award one of the five jackpots, a re-spin (with added wilds to the reels) or a number of free-spins. It’s possible to win up to 100 free-spins through this bonus, and action is constant, ensuring you don’t need to wait long to see the action unfold for yourself!

Monopoly: On The Money – Barcrest

Monopoly: On The Money is a video slot from Barcrest – another of the major games studios operating under Scientific Gaming’s brand. The slot is designed around a classy, stylish look and feel, and it’s also a relatively simple game – it’s built using a 3-reel, 5-row format with just 10 paylines.
With an RTP of 97.75%, the game’s a great wagering game (where allowed), and there’s also a Big Bet feature – something that we’ve seen in a number of Barcrest’s online and land-based slots.
Now, the main attraction of playing Monopoly: On The Money is the free-spins bonus. This is triggered by landing three or more of the scatter symbols anywhere in view, and you’ll then be awarded 10 free-spins. (You can, if you like, choose to gamble these spins to try to win more.)
During the bonus, you’ll notice that the cash-value symbols come into play. Any time you land one of these symbols AND the Monopoly Man lands in view, he will collect the values from those symbols, adding them to your total win count. OK, so it’s the same kind of concept we’ve seen in Reel Time Gaming’s Fishin’ Frenzy, but it’s still pretty decent!

Monopoly: Bring The House Down – Barcrest

Monopoly: Bring the House Down is a game from Barcrest. While it’s not one of the most successful Monopoly releases we’ve seen from them, it still deserves a mention! The game is built around a 5-reel, 4-row format, and there’s a total of 40 fixed paylines. There’s a whopping five bonuses which can be awarded, and during the bonuses so-called ‘Hot Zones’ become active.
Hot Zones are certain patterns that are overlaid on the reels, and these symbols then transform into wilds, giving you plenty of chances to hit a nice-sized win. These wild symbols can also be randomly upgraded to hotels, which boosts the win by a specified multiplier value. Like many of Barcrest’s games, Monopoly: Bring the House Down also offers Big Bets. These cost £20, £30, £40 and £50, and give you a number of added enhancements to the spins.

Monopoly: Big Event is one of the most popular slots ever to come out of the Barcrest game studio, and it’s found at online casinos and land-based casino all throughout the UK and the world. The game is built around a 5-reel, 3-row format, and there’s a total of 20 paylines active. These paylines are fixed – you cannot change the number of paylines active on each spin.
Monopoly: Big Event is famed for its bonus rounds, and with an RTP of 99%, it’s also one of the most generous-paying slots on the planet. Now, the game focuses all on the bonus feature, and this is triggered by landing three, four or five of the bonus scatter symbols anywhere in view. Once triggered, you’ll then be taken to a new game screen, where you’ll get to pick from cards. These cards can award free-spins or guaranteed wins.
There are three different types of bonuses which can be won here. The first is standard spins – these play out like regular spins in the base-game. Next up is the Dancing Wild bonus. During these free-spins, one reel will be transformed into a wild reel on each spin. The final bonus (and by far, the most lucrative of the three) is the Locked Wilds bonus. During this feature, any wild symbols that land in view are locked in place for the remainder of the feature.
Now, you’ll also notice padlock symbols present during the bonus round. When these land, one of the lower-paying symbols is removed from the reels. If you manage to land a total of five of these symbols, all of the lower-paying symbols are removed from the reels – this is where the major win-potential comes in!

Super Monopoly Money is a game from WMS, and while it’s not offered at a huge number of online casinos, it’s still fairly popular – and it’s not hard to see why. The game looks pretty basic initially – and it’s built around a classic 5-reel, 3-row format. You’ll notice almost immediately that there are a number of mystery symbols on the reels. When these symbols land in view, you’ll be tasked with pressing one of five icson; this will choose a random symbol which will then transform all of the mystery symbols into that symbol.
There’s a couple of bonuses to be aware of, and there’s a standard free-spins bonus. This is triggered by landing three or more of the bonus scatter symbols from left-to-right. Where things get interesting, however, is with the Wheel Bonus. Each time you form a win in the special free-spins round (triggered by landing the Money scatter symbols) you’ll add to a counter. You can then spin the giant Wheel of Fortune at any time using the Monopoly bucks you’ve collected. It’s possible to win up to 200X the total number of ‘bucks’ you’ve collected here, so there’s some real win-potential to look forward to!

Another game from WMS, Monopoly Luxury Diamonds is a simple slot that’s built around a 3-reel format. There’s just nine paylines too, making this game reminiscent to those you’d find in land-based casinos. The main bonus round is called the Wheel Bonus. Some of the symbols on the reels contain special wheel symbols. If you manage to line up three of these on a single payline, then you’ll trigger the bonus.
You will then be taken to a new screen, where you’ll get to spin a giant wheel. This wheel awards cash prizes – and while you’re unlikely to walk away with anything higher than 100X your stake, it’s a nice little feature that tends to drop in quite frequently. 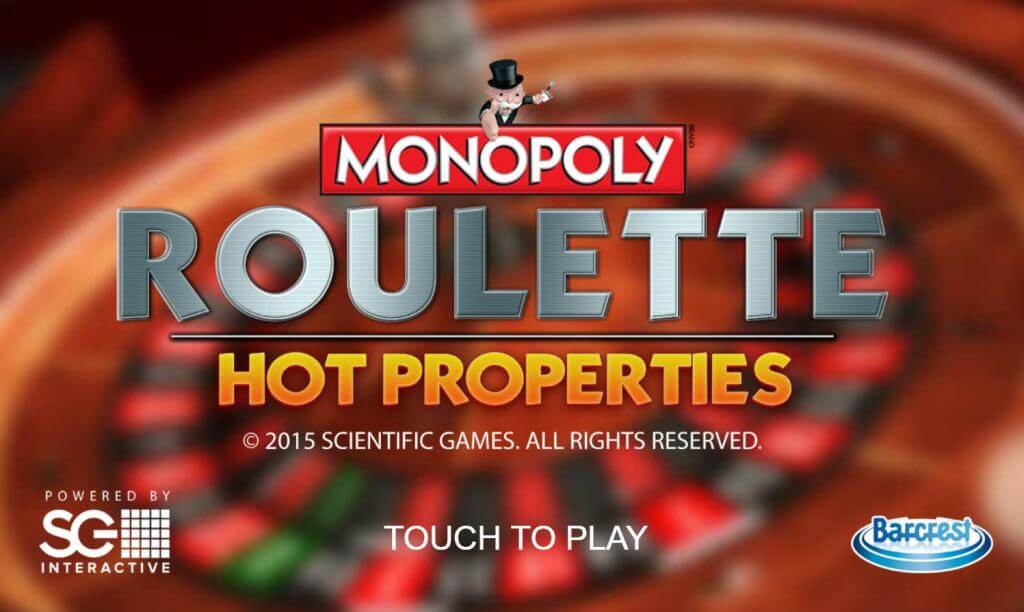 That’s a rundown of the most popular Monopoly video slots. However, there are also a couple of non-video slots which are built around the Monopoly theme. In the section below, we’re going to take a look at what these are.

Monopoly Roulette: Hot Properties is a variation of Roulette which has been developed by the Barcrest game studio. The game acts like a regular game of European Roulette – with the main difference being that there’s an additional yellow HOT pocket on the wheel. This requires an additional side bet, and if the ball lands in this segment (and you’ve placed the optional bet) then you’ll trigger a unique bonus round.
You will then be presented with a total of 18 playing cards, all of which are face down. You simply pick three cards, and you’ll then be made an offer based on the value of the three cards. You can then either accept this offer or reject it. If you reject it, you pick another three cards, and the process continues until you either accept an offer or until there are just two cards left. OK, so it’s basically Deal or No Deal, but it’s a pretty novel concept and it’s nice to see it built within a Roulette game!

Evolution Gaming are known for being the world’s leading live dealer games provider. They’ve released a number of unique games, from Football Studio, Lightning Roulette and Dream Catcher. The latter proved to be a phenomenal success, and that’s one of the reasons why Evolution Gaming partnered up with Hasbro to release a Monopoly-themed live casino game – called Monopoly Live.
Like Dream Catcher, the main game allows you to bet on segments on a giant Wheel of Fortune. There is, however, a major difference, in that there’s also a bonus round built into the game. If the wheel lands on the 2 or 4 segment, you’ll get to actually play Monopoly for real. You get either two or four rolls, and each roll sees you moving around the board, collecting cash values as you go! It’s a really novel concept, and it’s proved to be an exceptionally popular game, despite only being out for a few months.
As you can see, there are a number of Monopoly-themed games for you to enjoy. It’s clear that the theme is a popular one with players, and while the games are developed almost exclusively by WMS and Barcrest, more developers may be looking to a slice of the pie in the future.
Do you have a favourite Monopoly game? Then let us know in the forums!