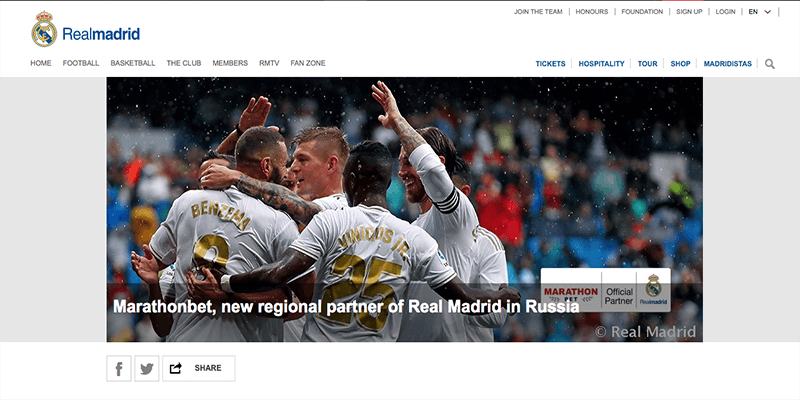 Marathonbet have signed an agreement with Spanish football giants Real Madrid, to become their first official partner in Russia, which will see the online bookmaker being promoted in the country when broadcasts of games featuring Real Madrid are televised in the country.

As part of this the deal signed with Real Madrid, Marathonbet will be advertised on the virtual LED boards in Russian broadcasts  which utilises digital overlay technology.

The deal also sees Marathonbet become Real Madrid’s first Russian partner in the club’s 117 year history. Russian customers of Marathonbet will also be able to take advantage of the bookmaker’s link with the Spanish club, with exclusive offers being made available to them. Such as chances to win VIP meet and greets with Real Madrid players and the chance to attend special events organised by the bookmaker.

The deal with Real Madrid is not the first sponsorship partnership with a football club that the online bookmaker has undertaken. Earlier this year in June, Marathonbet signed a two year deal with La Liga side Sevilla, which sees their branding appear on the Spanish club’s shirts for the next two seasons.

In England, Marathonbet signed a deal with Premier League Champions, Manchester City, to become the club’s official betting partner at the start of the 2018/19 season, after a multi year agreement was reached.