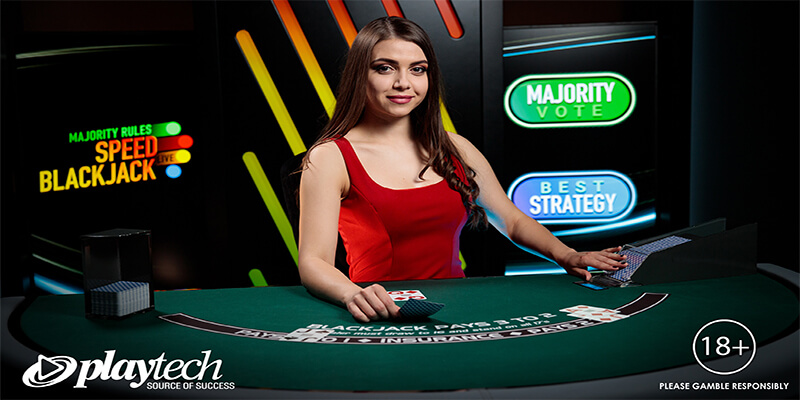 Majority Rules Speed Blackjack features two game modes, majority rules and best strategy, with the game mode decided by the number of players participating in each round. The live casino   game has  been developed in conjunction with GVC,  where the game will be  exclusive with their brands such as Ladbrokes and Coral, for the first month from launch.

Playtech  have  also  confirmed that they anticipate Majority Rules  Speed Blackjack will go live  across their entire network of operators next month in July.

“The success of our community Live Slots concept demonstrates player demand for interactive & fun games – the experience you would enjoy when playing alongside others in a land-based casino.”

“We’re confident the combination of engaging classic Blackjack gameplay and the new collaborative, community play will be a major hit with players and will of course create the proper Speed variant for Blackjack.”

Matt Charlesworth, Head of Live Casino at GVC adds: “Everyone at GVC was delighted to work closely with Playtech on Majority Rules Speed Blackjack, through all stages of concept, design and development – and we’re excited to offer this first of its type game to our players across the GVC brands.”

“Majority Rules Speed Blackjack captures a real community feel with the unique “Ask the Audience” voting approach to the in-game decision-making. The game is fully scalable, offering something very different for players, without deviating from classic European Blackjack with popular sidebets.”

About the Author... Total Posts Written: 787