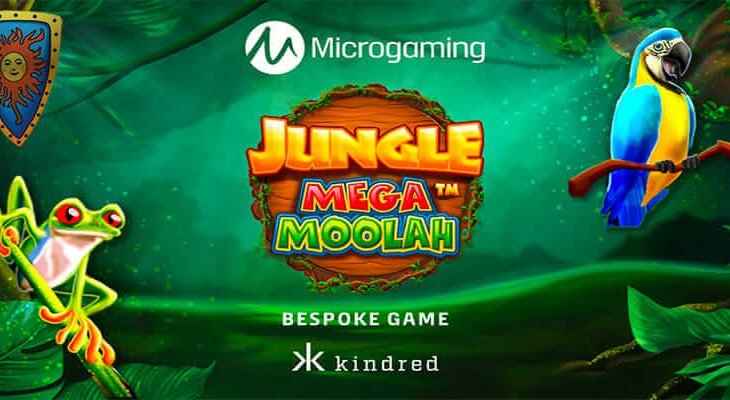 Isle of Man based Microgaming have this afternoon announced that their bespoke slot Jungle Mega Moolah, a take on their popular Mega Moolah progressive jackpot slot, is to launch exclusively with Kindred Group, owners and operators of online casinos Unibet and 32Red.

Built and developed by Aurum Signature Studios who we reported last week that they had joined Microgaming as one of their independent game studios, Jungle Mega Moolah will feature the renowned Mega Moolah progressive jackpot, giving players that extra level of excitement.

Retaining the funky jungle theme, Jungle Mega Moolah is a five-reel, 25 payline slot game where the wildlife is fiercer and wilder than ever before.

Chimpanzees act as scatters, and three or more of these hairy primates will trigger 15 free spins at a 3x multiplier. Of course, the real stars of the show are the jackpots, which give players the chance to win one of four progressive jackpots via four unique, randomly triggered bonus rounds.

Mega Moolah’s fame comes from the size and amount of its payouts and it currently holds the record for the top three richest online slot jackpots of all time.

Group Head of Casino at the Kindred Group, David Robertson commenting on the release of Jungle Mega Moolah, stated: “Progressive jackpots don’t come any bigger than Mega Moolah, and it’s exciting to be able to offer our players our very own unique version of a classic game.”

“It’s a testament to Microgaming that even with the sheer scale of their network they can provide bespoke games exclusively tailor-made for individual operators.”

While Andrew Booth the Director of Games at Microgaming, added: “What we like about Jungle Mega Moolah is that it’s completely unique to Kindred Group Casino but also linked up to a huge progressive network that serves hundreds of thousands of players.”

“As well as supplying the biggest portfolio of the best games, we pride ourselves on offering our operators unique and different experiences for their players.”