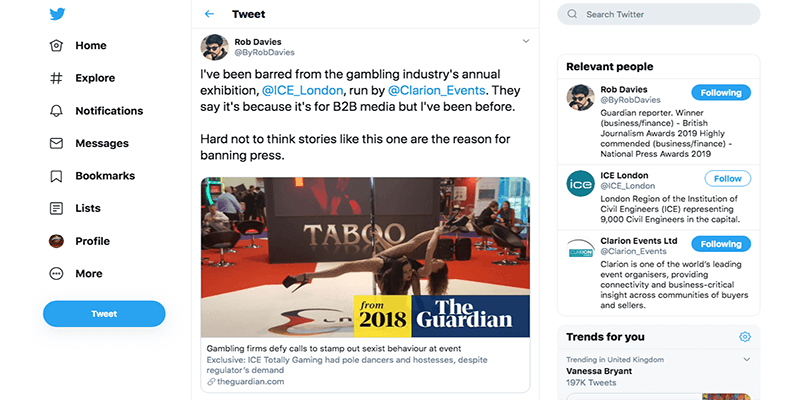 The Guardian journalist Rob Davies who covers the gambling industry for the British broadsheet, took to Twitter last night, to complain that he has been ‘barred’ from attending next week’s ICE 2020, which runs from 4th February to 6th February at London Excel.

Davies, whose stories we have commented on in the past here on Casinomeister, who has nearly 7,000 followers on the social media platform, tweeted: “I’ve been barred from the gambling industry’s annual exhibition, @ICE_London, run by @Clarion_Events. They say it’s because it’s for B2B media but I’ve been before. Hard not to think stories like this one are the reason for banning press.”

A discussion ensued with Davies and some of his followers, with Davies confirming that he was ‘declined’ a press pass for the event.

Davies in the past has been critical of the gambling industry and the story with which he alludes to in his initial tweet, concerns his article on the ICE event held in 2018, titled: “Gambling firms defy calls to stamp out sexist behaviour at event.” Of which you can read in full here.

No doubt Davies will get around the fact his application for a press pass was declined by ICE 2020 organisers Clarion, by registering as a visitor for the B2B event. Something which I am sure we will all get to read about in a forthcoming edition of The Guardian over the coming days.