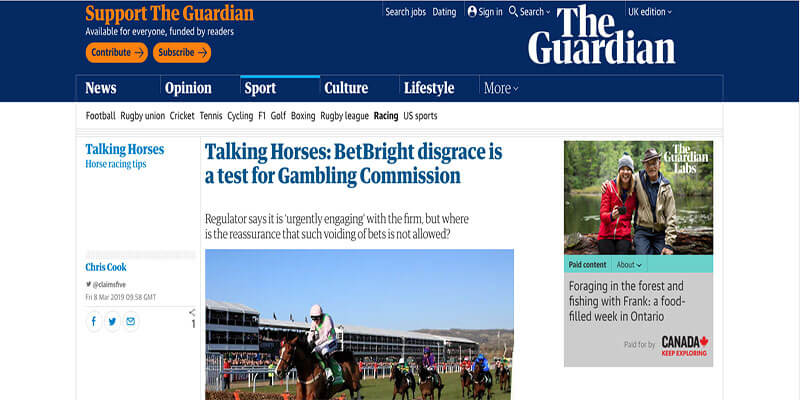 In further damning news concerning Betbright, since their takeover by 888 was announced on Monday just gone. The Guardian newspaper this morning labelled the actions of the Dublin based bookmaker a disgrace. Journalist Chris Cook, in his Talking Horses column for the newspaper, focused on the news that the bookmaker is to void all ante post bets.

Commenting on the fact that he has been in touch with United Kingdom Gambling Commission, Cook’s ire is also directed at the UKGC. Asking as to why the body that oversees gambling in the UK has not even reassured the public, that bookmakers should not be able to act in the manner that Betbright has. Which in turn has upset many of their now former customers.

To an extent Cook raises a very valid point and  it leaves the question as to whether the new owners in 888, should also be held accountable and take on the responsibility of the bets struck at Betbright?

Well not exactly, as 888 did not buy the bookmaking business as such or the customer base. They basically just bought the technology and the product development employed by the bookmaker. 888 have though, stepped into the row and promised to honour all Cheltenham Festival ante post positions as a gesture of goodwill. For this, they actually should be applauded in my view.

However, the fact remains, many ‘punters’ have been left high and dry as a result of Betbright voiding all remaining ante post bets placed with the bookmaker. Something that Chris Cook at the Guardian reaffirms in his Talking Horses article. He is of the view that the Gambling Commission should make the bookmaker ‘live up to it’s responsibilities’. He does make a valid point to be fair.

It is one thing, the UKGC holding operators’ collective feet to the fire over some issues, but turn a blind eye to other areas that need policing. Failure in doing so will thus allow more criticism aimed at the betting and gambling industry in the UK as a whole. Which is a lose lose position for anyone involved in it. Whether you are an operator or a punter.