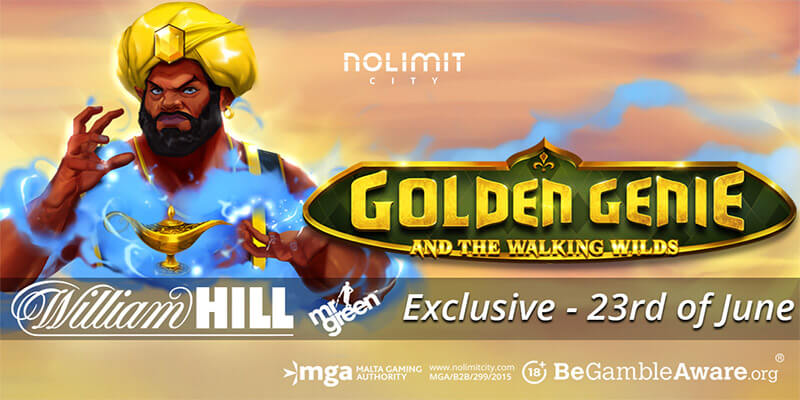 Malta based casino game content developer Nolimit City who were behind the Deadwood xNudge game,  have announced this morning the release of their latest slot game, Golden Genie and the Walking Wilds

The initial release of Golden Genie & The Walking Wilds will be exclusive to the William Hill Group, being  showcased on sites such as the  Mr Green online casino,  prior to going live with other operators that feature game content from Nolimit City.

According to the press release material sent out by those folks at Nolimit City this morning, Golden Genie offers players a magical experience thanks to the feature rich game design and lush graphics.

Set in an Arabian whimsical setting with the all mighty Genie, the video slot offers two random base game features and an exhilarating Bonus round with the ‘Genie Parade’, all Genie wild scatters turn into Walking Wilds and have an increasing multiplier with every move.

The foremost Golden Genie will collect the multiplier and transfer the accumulated amount to the next Genie for an almost unlimited potential! Speaking about the release of Golden Genie & the Walking Wilds.

Malcolm Mizzi the Commercial Director at Nolimit City said: “Working closely with the team at William Hill is an absolute delight. No one is as enthusiastic and passionate about great slot games as the people behind this incredible company.”

“We’re exhilarated to be showcasing such a feature rich and engaging title on all their brands worldwide!”