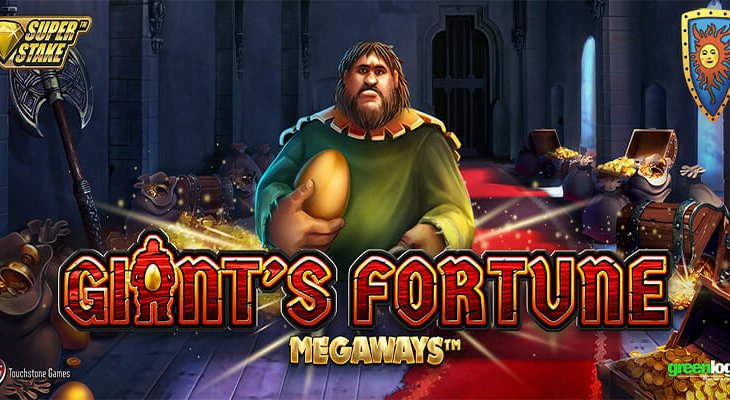 iGaming platform provider and casino game studio Stakelogic who are behind the Super Stake game mechanic. have announced this morning their latest slot game Giant’s Fortune MegawaysTM, which is available to play at Casinomeister accredited casinos Videoslots, 21 Casino and numerous others.

In a Press Release sent out this morning on behalf of Stakelogic, Giant’s Fortune MegawayTMs uses Big Time Gaming’s revolutionary MegawaysTM mechanic to deliver up to 117,649 ways to win with every spin. Players can also take advantage of unused Wilds that land on the reels during the base game – they remain in place from round to round until they form a winning combo.

The Egg Collector bonus is triggered when four or more Egg Scatter symbols land anywhere on the reels. When they do, they will award three Free Games; any spin that adds an Egg symbol will see the counter re-set to three Free Games.

If at any time a reel becomes filled with Egg symbols, an extra empty symbol space will be added to the reel. If all six reels are filled with seven Egg symbols the feature ends and awards a cracking win of 10,000x the player’s original bet.

If that wasn’t enough to get players in a spin, a Free Spins Bonus is triggered when four or more Free Spins symbols land on the reels. Just like in the base game, any unused Wilds that land remain in place until they form a winning combination.

Giant’s Fortune MegawaysTM also includes Super StakeTM, which allows players to place a side bet and greatly increase the chance of triggering one of the game’s bonuses; a win multiplier is added to the base game and carried over to the Free Spins feature which triggers with one less Free Spins Bonus symbol.

The slot also benefits from the same bold and striking design that Stakelogic has become famous for, as well as authentic sound that makes players feel like they really are playing alongside the giant.

Salvatore Campione, Head of Greenlogic® at Stakelogic, said: “This is a game of big proportions; the giant theme is underpinned by Big Time Gaming’s MegawaysTM to deliver a huge number of ways to win with every spin. We have also ensured that potentially massive wins are only ever a spin away.”

“This has been achieved by combining a series of features including Wilds, Multipliers and Free Spins as well as our ground-breaking Super StakeTM innovation. Touchstone Games have been amazing partners and launching this slot together is a stepping stone to great things”